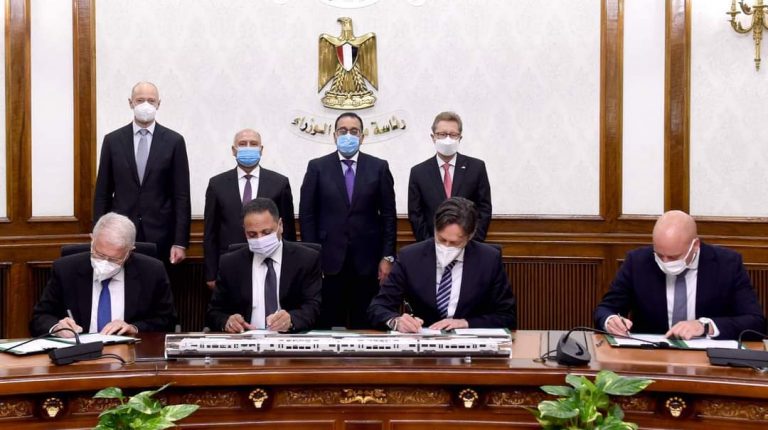 Egypt’s Prime Minister Mostafa Madbouly witnessed the signing of a contract with German Siemens AG to implement the 660 km electric train network in Egypt connecting Ain Sokhna, on the Red Sea coast, with Matrouh on the Mediterranean coast.

The contract was signed by Siemens Mobility, Orascom Construction, Arab Contractors, and the National Authority for Tunnels (NAT) to design, install, and maintain Egypt’s first high-speed rail system for 15 years.

Madbouly confirmed President Abdel Fattah Al-Sisi’s continuous guidance to provide mass transportation at the highest level for Egyptian citizens noting that the president personally followed the steps of signing this contract, which will bring a civilized shift in transportation in Egypt.

It was also agreed to discuss and finalize other agreements for two other high-speed railway lines in the coming months, increasing the total distance of this new rail network to 1,800 km. The two additional lines will connect the Greater Cairo region; from the 6th of October City, along the Nile River, with Aswan and Luxor.

The Minister of Transport also indicated that the cooperation led by the German company will implement all work systems for the project, including signals, railway works, electromechanical works, in addition to the manufacture and supply of mobile units of all kinds, including express trains, regional trains, and electric tractors, As well as the supply and installation of railway works (rails and switches).

The minister added that the express train is characterized by a large transport capacity, which reduces traffic congestion and achieves higher safety for passengers and a better impact on the environment, which will serve the state’s ambitious plan to develop Egyptian ports, including Sokhna port.

Al Wazir indicated that this train will enhance the infrastructure of the areas it passes through and help achieve urban sprawl, in addition to linking the new administrative capital and new cities to the railway network for transporting passengers and goods.

New electric trains are environmentally friendly and will constitute a major qualitative leap in the field of transportation.

President and CEO of Siemens AG, Roland Bosch, said Siemens Transport Systems is proud to support the efforts of the Egyptian government to develop the transport sector in the country, by establishing the first system of electric high-speed trains in Egypt, stressing that this strategic project will create many job opportunities, support economic growth and improve the quality of life for millions of Egyptians by providing an efficient, safe and advanced transportation system.

He added as one of the success partners of Egypt for decades, Siemens is committed to providing the latest smart technology solutions and continuous support to build and refine local skills and cadres within the framework of this project.