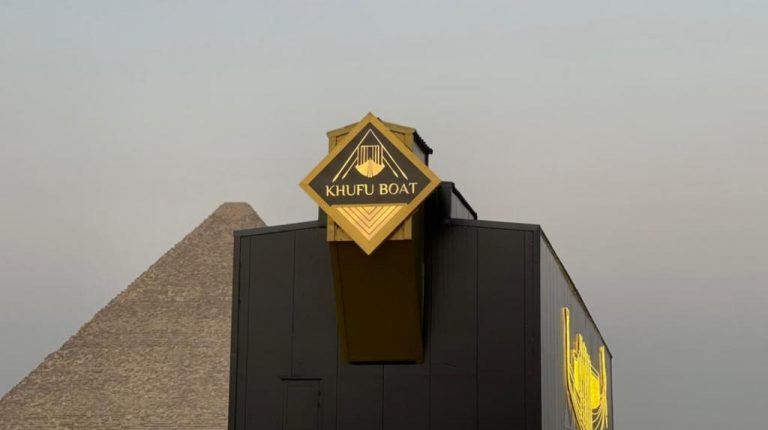 Early August, Ancient Egypt King Khufu’s 4,600-year-old ship traveled from its longtime home near the Giza Pyramids to a dedicated building within the Grand Egyptian Museum (GEM), a state-of-the-art venue set to open outside the capital Cairo in late 2021.

The 8-kilometre-long relocation journey was part of efforts to preserve the world’s oldest, biggest intact made-of-wood artefact in the history of humanity.

Atef Moftah, General Supervisor of the GEM project and the surrounding area, described the transportation of King Khufu’s first boat (also known as Solar Boat) as one of the most important, challenging, and unique archaeological and engineering projects. He added that the work team responsible for the transportation procedures spent almost a year studying and planning the trip.

The boat was transferred in a shock-absorbing metal container carried by a remote-controlled vehicle especially imported from Belgium for this purpose. The vehicle had to move slowly to protect the fragile vessel from damage. In total, the trip took 10 hours.

The smart vehicle was designed to overcome any obstacles that may be encountered on the road, and to manoeuvre in curves and coils, as well as absorb any vibrations while moving. The vehicle proved its ability to carry out the task successfully.

Moftah noted that they carried out numerous simulations for the transfer, where the vehicle was loaded with an object with the same weights and dimensions of the boat. Special measurement devices were installed to test the performance of the vehicle, the stability of the metal container, and its steadiness on the road, to ensure that the boat would reach its destination safely.

The boat will undergo a restoration process before being put on display at the GEM.

The 20-tonne, 42-metre-long vessel was found buried on the southern side of Khufu’s Great Pyramid on 26 May 1954 by Egyptian archaeologist Kamal Al-Malakh. He and restorer Ahmed Youssef worked on restoring and re-installing the ancient boat. It has been displayed in a museum holding the same name at the Giza Plateau since 1982.

The first boat of King Khufu was made of cedar wood that was imported from  the Levant. It was found preserved in a pit covered with about 41 blocks of limestone, and disassembled into about 6,500 parts that were carefully arranged to make it easier to assemble. The boat’s oars, ropes, and booths were also well-preserved.

Some researchers believe that the ancient Egyptians built this boat for the king to use it on his daily trips with the sun god “Ra” in the heavens of the world by day and the sky of the other world by night. Other researchers said the boat was just used to transport the king’s body from the eastern bank of the Nile to the western bank where he was buried.