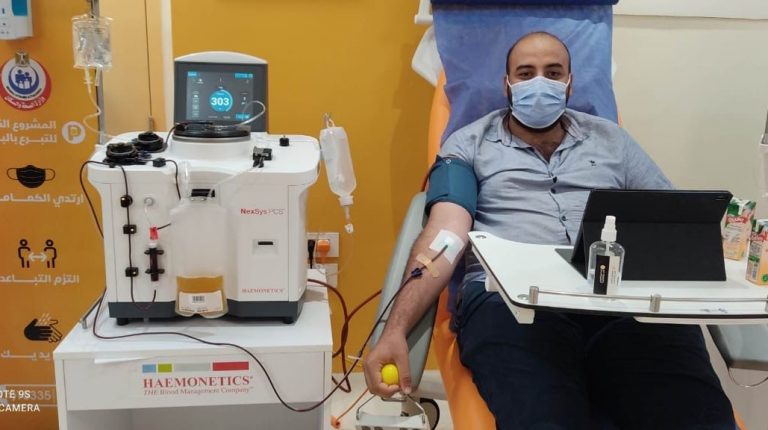 Egypt’s Minister of Health and Population Hala Zayed announced, on Tuesday, that 1,320 donors have visited the plasma collection centres, as part of the national plasma donation project for industrialisation and self-sufficiency of plasma derivatives.

The project was launched on 14 July and lasted until 14 August.

There were six plasma collection centres distributed in five governorates, in which the project was launched. Total of 20 additional centres were also scheduled to be completed and equipped by the end of the year.

Working hours in plasma collection centres have been extended throughout the week.

Donors should be between 18 to 60 years old, and weigh over 50 kg, according to the regulations announced by the ministry. They also need to have a proof for a positive PCR test for the virus, a proof for two negative tests, and plasma donation should be 14 days after the last negative test and showing no symptoms of the disease.

The ministry called on citizens over the age of 18 to actively participate in the national plasma donation project to provide medicines derived from plasma to save the lives of patients. The project contributes to achieving self-sufficiency in plasma derivatives to provide medicines for the treatment of many chronic diseases, blood diseases, liver, kidney and burns.

Supervisor of the National Plasma Donation Project, Dr. Nevine Al-Nahhas, said that the plasma donation process should be conducted once every two weeks to ensure the preservation of the health and safety of the donors.

She pointed to the benefits of donating plasma, the most important of which is activating the donor’s bone marrow to produce new blood cells, activating the body’s systems responsible for renewing plasma proteins, in addition to conducting a free periodic examination for the donor, which includes all diseases and viruses, to check on his health.