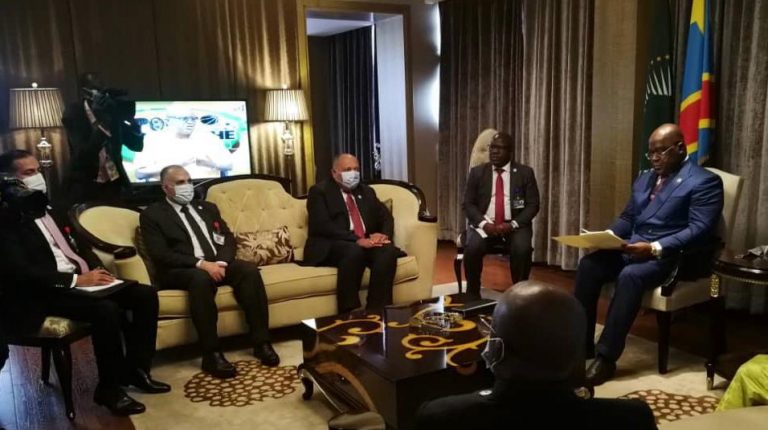 Egypt’s Minister of Foreign Affairs Sameh Shoukry has confirmed Egypt’s keenness on the success of the renewed Ethiopian dam negotiations, which are taking place in the Democratic Republic of the Congo’s (DRC) capital, Kinshasa.

The confirmation was delivered on Sunday to President Felix Tshisekedi, President of the Democratic Republic of the Congo (DRC) and current head of the African Union (AU), confirming.

Tshisekedi received Shoukry and Egypt’s Minister of Water Resources and Irrigation Mohamed Abdel Aaty for a meeting, which came after the opening of the ongoing round of negotiations on the Grand Ethiopian Renaissance Dam (GERD).

Shoukry delivered a letter from President Abdel Fattah Al-Sisi to President Tshisekedi, which highlighted Egypt’s appreciation of the DRC’s efforts to re-launch a negotiation process.

It is hoped that this process will lead to a fair, balanced, and legally binding agreement that takes into account the interests of the three countries involved in the GERD negotiations, namely Egypt, Sudan, and Ethiopia.

It is also hoped that the negotiations will strengthen the relations of friendship and cooperation between the three countries, and deepen the bonds of brotherhood between their peoples.

The president’s message confirmed that Egypt has a sincere political intention to reach the desired agreement at the earliest possible opportunity. This is with a view that it will take place before the next flood season, and that it will support President Tshisekedi’s efforts in this regard.

President Al-Sisi stressed that Egypt is looking forward to the meetings in Kinshasa to succeed in launching an effective path for negotiations with the participation of international partners.

This will take place in a way that enables the three countries to find solutions to the technical and legal issues in dispute, with the aim of crystallising a comprehensive agreement to fill and operate the dam.

During the meeting with the Congolese President, Shoukry reviewed Egypt’s efforts over a decade to reach an agreement on the controversial fam.

Shoukry affirmed that Egypt has consistently presented solutions and proposals that take into account Ethiopian concerns. These are in a manner that guarantees the achievement of its development goals and preserves the interests of the two downstream countries.

The minister pointed out that the success of the ongoing efforts to settle the issue of the dam and to avoid aggravating the situation in a region already suffering from turmoil and instability requires the political will of all parties to reach a fair and equitable agreement.

Opinion|The Nile is a red line