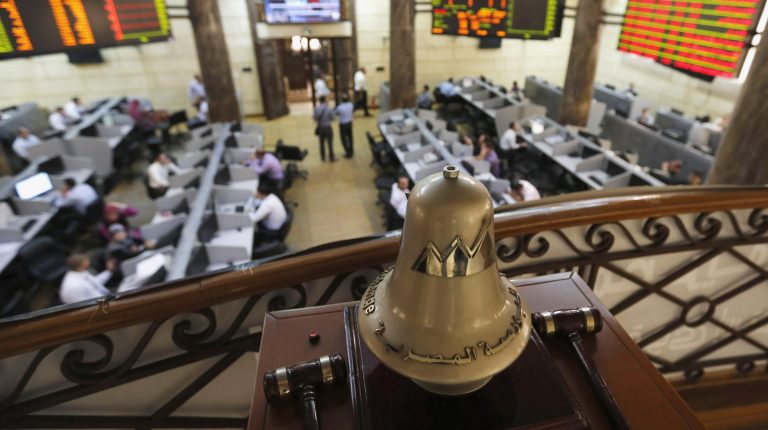 The benchmark index EGX30 at the Egyptian Exchange (EGX) closed down 0.6% at the end of trading, on Tuesday, reaching 10,471 points.

Yasser El-Masry, Managing Director at the Arab African International Securities, said the decline began with a profit-taking wave that left a slight decline.

This was then followed by a state of panic by individuals, leading to further declines. This came on the back of the trend set by brokerage firms to close the marginal positions of the Dice stocks, followed by “Margin Call” on the remaining securities.

El-Masry added that this is called the “domino effect”, especially as Dice stocks have acquired a large share of trading in the last period. He pointed out that the vision held by investors is illogical in approaching this sector.

There are other stocks, such as Fawry and B Investments, with the e-payments sector being the racehorse everyone’s betting on in 2021.

He questioned investor interest in this sector, when the EGX has the real estate sector secured by companies’ real estate assets. This is in addition to sectors such as banking, cement and iron and other secured sectors, in addition to e-payments, which he described as promising.

El-Masry expects a new wave of rises near the beginning of the holy month of Ramadan until the end of May, where it is likely that the EGX30 will reach 11,500-11,600 points.

He stressed that the sharp decline in the EGX70 EWI is due to Fawry’s transfer of its shares to the EGX30, with the stocks being a supportive force for the small and medium enterprises index.

He also noted that it is necessary to look into the capital gains tax file, so that it does not fall into the same confusion early next year.

El-Masry added that the application is not a problem, however, as the real problem lies in the mechanism of organising tax collection. He said that Egypt is the only country among emerging capital markets that applies taxes on money market transactions.

Mohamed Kamal, Head of Corporates Department at Al Rowad for Securities Brokerage, said that successive “margin call” operations led the market to further declines. He pointed out that there is no justification for individual investors to panic and retreat this much.

Kamal added that there was a strong wave of selling by foreign investors at the level of both stocks and bonds, indicating that the process of foreigners’ exit is a negative sign at all levels.

He stressed that the market is trying to hold itself together above the 10,400 points level as a strong support, but a break of this level down is more likely in light of the sharp declines.

Kamal advised investors to be cautious and take advantage of rises to ease positions, indicating that any realistic prediction in light of the uncertainty would be difficult to make.

Rania Yacoub, President of Three Way Securities Brokerage, said that the massive declines in Egyptian stocks and indices reduce any chances of an upward rebound that allows for a recovery.

This is due to the support levels being broken in succession, putting the market in a state of selling oversaturation.

She also said that this large decline makes forming a bottom currently difficult, and that the main index will test the level of 10,250 points. This comes after it broke the level of 10,400 points at the beginning of trading on Wednesday.

Yacoub added that despite the suspension of trading for 30 minutes in the first hour of the session, the decline is still continuing. The reasons for this decline remain unknown, especially as the economic situation is stable as evidenced by the Central Bank of Egypt (CBE) fixing the interest rate last Thursday.

Foreign policy conditions are also largely stable according to the official data of the Egyptian Ministry of Foreign Affairs.

She advised dealers to be cautious and take advantage of any upward rebound to loosen positions until the vision becomes clearer in the coming period.

Egyptian U-21 youth to trade on EGX without guardian