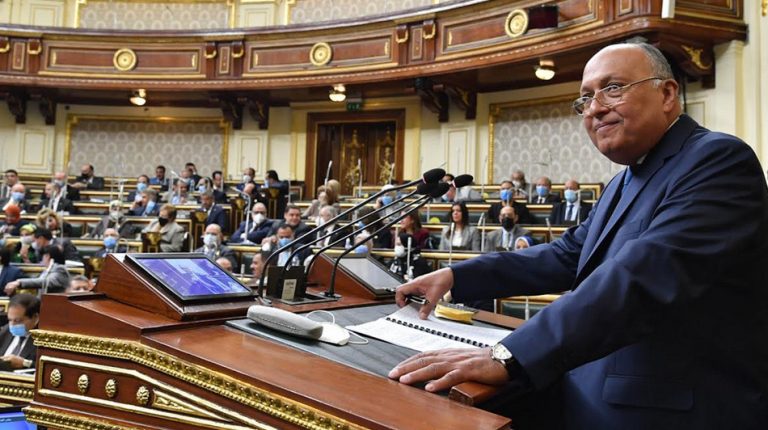 Egypt will not compromise or bow down to danger regarding its interests in the River Nile or its water rights, the country’s Foreign Minister Sameh Shoukry has said.

During a speech before Egypt’s House of Representatives, on Tuesday, Shoukry added that Ethiopia has unilaterally started the filling of the Grand Ethiopian Renaissance Dam (GERD).

This has taken place without an agreement having been reached with the other two countries involved in negotiations on the dam, namely Egypt and Sudan. It has also commenced without taking into consideration the interests of these two downstream countries.

Shoukry added that his ministry has managed to bring the issue of the Ethiopian dam to the international community’s attention, referring to a special United Nations (UN) Security Council session held in June last year.

Egypt has asserted before the UN Security Council and the international community, “The River Nile is an existential issue for [the country] and its people, and that the GERD issue affects more than 250 million citizens in Egypt and Sudan,” the minister said.

He noted that Egypt also participated in GERD talks under the auspices of the African Union (AU). Negotiation is not an aim in these talks, but rather to find a method of reaching a fair, binding, balanced agreement that protects its rights.

Shoukry said that Egypt signed an agreement drafted by the US government to regulate the operation of the giant hydroelectric dam, which Ethiopia rejected to sign.

He said that Egypt has participated in all meetings and talks on this vital issue, but it only faces Ethiopian obstinacy.

The minister reaffirmed that protecting Egypt’s historical rights in the River Nile is a top priority for the Egyptian Ministry of Foreign Affairs.

Addis Ababa has to acknowledge the water rights of Egypt and Sudan, as well as related international laws, Shoukry said. He added that the international community has to be ready to take its responsibility regarding this file.

Shoukry stressed that Egypt aims to reach a fair, balanced, and binding agreement that takes into consideration the interests of the three countries. The agreement will seek to protect the Egyptian and Sudanese peoples from any threats, whilst also achieving Ethiopia’s development goals.

After 10 years of talks between Egypt, Ethiopia, and Sudan, on the GERD issue, no agreement has yet been reached. In July last year, Ethiopia confirmed that its first-year target was reached for filling the mega-dam on the Blue Nile River.

Egypt depends on the River Nile for about 90% of its water needs, including for drinking water, industry, and agriculture. The country remains concerned that the Ethiopian dam will shrink its share of water from the River Nile, and cause harm to its people.

Its water share of waters from the River Nile stands at about 55bn cbm, while actual water needs reached 59bn cbm, according to the Egyptian Ministry of Water Resources and Irrigation.

Through the GERD project, Ethiopia seeks to create thelargest hydropower country in Africa, with the dam expected to generate more than 6GW of energy by 2021.

Also during his speech on Tuesday, Shoukry said that Egypt has intensified efforts to maintain security and stability in Libya. Egypt has rejected foreign interference in the war-torn country to avoid turning its westerly neighbour into a haven for terrorist groups that threaten Egyptian national security, he added.

Shoukry noted that Egyptian efforts have been milestone turning points in the Libyan crisis. These steps include the Cairo Declaration initiative of June 2020, which was a clear call for adhering to the political solution to the crisis and halt military escalation, he added.

The minister said that the warning by Egypt’s President Abdel Fattah Al-Sisi, put out in June last year against any advances of forces or militias from crossing the Sirte and Jufra red-line, has led to the halt of fighting. It has also meant that international agreements represented in the Berlin Conference have been activated.

Moreover, Shoukry said that Egypt has intensified efforts in advancing peace process efforts on the Palestinian Cause. The country has also sought to enhance its partnership with its fellow African countries in development projects, he said.

On the other hand, the Foreign Minister said that Egypt and the US are enjoying established relations, affirming his country’s keenness on enhancing economic, military and trade cooperation as well as counterterrorism.

Shoukry noted that the volume of trade exchange between Egypt and the US increased by 76% from 2016 to 2019. US investments in Egypt amounted to $22bn, with the US ranking third among those countries investing in the latter.

He noted that Egypt has also enhanced its relationship with Europe, through the European Union (EU) and European Investment Bank (EIB). This has taken place to attract more investments, increase the flow of tourism, and open a market for Egyptian goods in these countries.

Meanwhile, Shoukry said that Egyptian-Russian relations have witnessed remarkable development, which has been reflected in mutual visits, and economic, political and cultural cooperation.

He also highlighted his ministry’s successes in several issues over the past few years, including the issue of Egyptians stranded abroad during the novel coronavirus (COVID-19) outbreak in 2020. About 30,000 citizens were repatriated from different parts of the world, he said.

Egypt will not allow any violation to its rights to River Nile water: Al-Sisi

Egypt will not compromise on its water rights: Foreign Minister