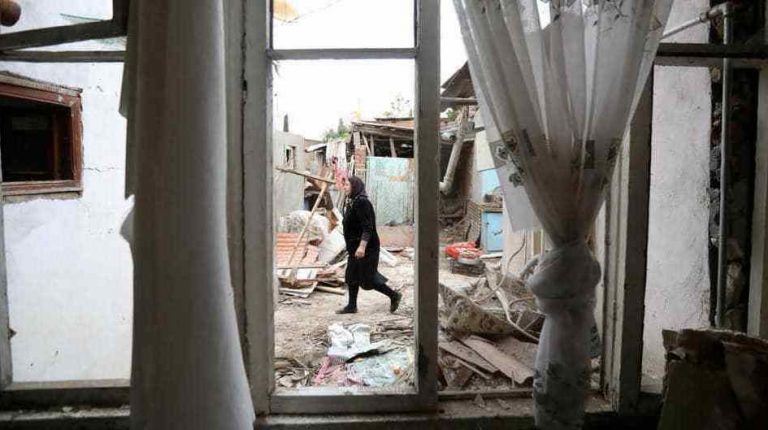 Armenia and Azerbaijan have, once again, been engaged in fierce fighting over the disputed Nagorno-Karabakh region, in what is considered the worst regional confrontation since the 1990s.

Despite international and regional efforts to halt hostilities, the conflict has continued, raising concerns over the future of the decades-long crisis.

Hundreds have been killed and wounded in the fighting, while thousands have fled the region to escape the conflict, as fears have increased over the actual death toll among civilians and militaries from both sides.

Russia, which brokered a temporary ceasefire deal on Saturday, has called for the truce to be respected, amid reports of violations over which both warring countries exchange blames.

The European Union (EU) welcomed the ceasefire, whilst urging the two sides in the conflict to strictly abide by the agreement. It also called on all actors, including external parties, to refrain from any actions that may lead to further casualties, a statement read.

Whilst Turkey has pledged to support Azerbaijan “with all possible capabilities until the liberation of Karabakh,” it has been accused of sending Syrian mercenaries and other military support to back Azeri forces. Turkey has vehemently denied the accusations.

While Russia is the main supplier of arms to Armenia, Azerbaijan has depended on various sources of armament since 2019, including Spain, Belarus, Israel, and Turkey, according to the Stockholm International Peace Research Institute (SIPRI) data.

Armenia’s Ambassador to Egypt Karen Grigorian sat down with Daily News Egypt to discuss the recent developments in the Nagorno-Karabakh region, alleged Turkish involvement in the fighting, and the international community’s response. Mutual cooperation between Egypt and Armenia, and the latter’s request for a diplomatic response from Cairo to the ongoing crisis were also addressed.

What lies behind the return of fighting in Nagorno-Karabakh? Why have all attempts to maintain a ceasefire and resume peace talks collapsed?

Azerbaijan has never hidden its strategic goal to resolve the Nagorno-Karabakh conflict by using force, keeping the tension high along the line of contact between Nagorno-Karabakh and Azerbaijan, and along the Armenian-Azerbaijani state border. At the same time, we should keep in mind anti-Armenian hate speech, which exists not only in statements made by the military-political leadership of Azerbaijan, but also in secondary schools, universities, and even nursery schools.

To understand the situation, it will be enough to look at Azerbaijani textbooks, where Armenians are represented as an absolute evil. As a result, several generations have been brought up infatuated with the idea of seizing Nagorno-Karabakh, and annihilating its Armenian population through ethnic cleansings.

Moreover, you will be surprised that the current leader of Azerbaijan has publicly proclaimed Yerevan, the capital of Armenia, as Azerbaijani ancestral territory. One should laugh at statements like this, but right now, Armenian children in Nagorno-Karabakh are hiding in bomb shelters and their fathers are standing firmly against the enemy at the frontline. This is the reality. The longstanding war rhetoric of the president of Azerbaijan has materialised yet again, but now in its most terrible form.

What is Turkey’s role in the conflict? What are the benefits it might have?

Turkey’s role in the conflict is another important reason for the current developments – a reason with even deeper roots. Sure, one-sided pro-Azerbaijani statements of Turkish military-political leadership and drastic increase of military procurement from Turkey to Azerbaijan should be mentioned here. However, to understand the current war we should keep in mind the neo-Ottoman aspirations of Turkey.

It is obvious that officially, Ankara is looking to recreate the Ottoman Empire. There has been the Armenian genocide which was committed by several different Ottoman leaderships, as well as several wars waged by Turkey against Armenia after the First World War, multiple ethnic cleansings committed by the Azerbaijani leadership in the 1980s-1990s, and, finally allied relations of Turks and Tatars (the name given to Azerbaijanis before the 1930s) throughout history. All of this makes it clear that the long-term goal of the Turkey-Azerbaijan military-political alliance is the annihilation of the very existence of Armenians, not only in Nagorno-Karabakh but also in Armenia itself.

Today, Armenia is waging war against both Azerbaijan and Turkey. It is worth mentioning that today’s Turkish policy towards Armenia is very similar to the Ottoman policy a century ago. Recently, Turkey has lost some of its positions in North Africa and the Eastern Mediterranean, which is a blow to its image and to its neo-Ottoman aspirations. This unlawful step on Turkey’s part can also be considered as an attempt to have further benefits in another region.

Turkey has announced unconditional support for Azerbaijan, and is allegedly providing the country with various military capabilities and Syrian mercenaries. How do you view this?

I believe that without unconditional Turkish political and military support, Azerbaijan would not dare to start a war, which may have disastrous consequences for the whole region. The drastic increase of military procurement, as I have already mentioned, has a highly negative impact on the situation.

The direct involvement of Turkish military forces and mercenaries from “terrorist” groups, as well as the collaboration between Azerbaijan and Turkey, should be and is being condemned by the international community. The only countries which still reject the presence of “terrorists” in the Azerbaijani army are those countries which are officially allied to Baku. As we can see, in its traditional manner, Turkey is exporting instability from region to region, this time to the South Caucasus.

Turkey denies supporting Azerbaijan with US-supplied F-16 aircraft in the conflict. What is your response to this?


Just as it denies the Armenian genocide, Turkey denies its military involvement, and also denies the presence of terrorists in the Azerbaijani army. Speaking of which, these “terrorists” are still officially being transported to Azerbaijan by Ankara.

One can think about a very long catalogue of facts which are being denied by Turkey, but which are recognised by the international community. We have announced that the direct involvement of Turkish F-16 fighter jets in the war has been proven, and the evidence will be introduced at an appropriate time. I think that the international community has no reason not to trust official statements by Yerevan.

Armenia has requested Egypt’s diplomatic intervention in Nagorno-Karabakh. Does Armenia seek other kinds of support from Egypt, in addition to diplomacy?

We, Nagorno-Karabakh and Armenia, are very confident about our military power, and that the Azerbaijani aggression has no chance of succeeding. These are the reasons why we contacted a number of friendly countries in order to unite efforts, and to stop senseless bloodshed from both sides. Armenia and Egypt are sharing common views on regional problems. We believe that our joint positions and actions are contributing not only to local, but also to global security.

Do you believe that Russia would activate the joint defence agreement with Armenia? How do you view the international community’s response to the recent escalation, particularly that of Russia and the US?


Armenia and Russia are the closest of allies, which is confirmed by treaties which in their turn contain certain obligations. In fact, Armenian-Russian relations are not only about treaties.

First of all, we share periods of common history, and our cultural ties are also very strong, so we have no reason not to trust our ally. It is obvious that we find ourselves in a very rare situation, when there is international community consensus regarding Turkey’s involvement which plays a negative role in the conflict. At the same time, we believe that wider public recognition of the fact that Azerbaijan is the initiator of the aggression will contribute a lot to its end.


Iran says it has a proposal aimed at ending the conflict – would Armenia accept this?


We highly appreciate the efforts of every country to resolve the conflict with Azerbaijan. However, right now there is only one internationally recognised framework for dealing with the issue, and that is the OSCE Minsk Group co-chair. For this, the co-chair states are Russia, France and the US.


Egypt and Armenia have a long and close historical relationship, and Armenians greatly contributed to Egypt’s science, economy, and culture. Can you tell us more about the situation of Egypt’s Armenian community?


It is true that our countries enjoy close, historical relations, and it is also true that Armenians have been living in Egypt for centuries. They have contributed not only to the economy, science, and culture of their new homeland, but also to Armenian-Egyptian relations. At the same time, they have shown and gained a lot of respect here, on Egyptian soil. The community, being a living organism, is developing. The overwhelming majority of Egyptian Armenians are currently living in Cairo and Alexandria, where there are up to 10,000 members of the community. 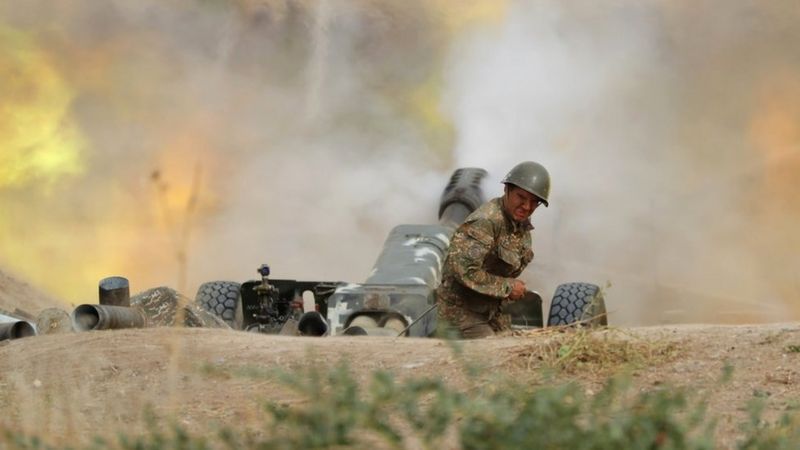 Can you tell us more about the Egyptian-Armenian cooperation in different areas? Does Armenia have any plans to attract Egyptian investments?

We should admit that, right now, the economic relations between our countries do not correspond with the high level of political relations. At the same time, we and our Egyptian partners see huge economic potential in a number of areas, for instance in IT, education, renewable and energy.

We are working towards ensuring the economic relations between the two countries reach their highest potential in the very near future. Unfortunately, a number of joint perspective programmes have been postponed this year because of the novel coronavirus (COVID-19) pandemic.

We are confident that the upcoming signing of a treaty between the Eurasian Economic Union (EAEU) and Egypt will open the door for enhanced economic cooperation. It is anticipated that this will not only be between the EAEU countries and Egypt, but also between the EAEU and other African states, as Egypt is capable of being a trusty mediator.

The Egyptian and Armenian Foreign Ministers have recently agreed to jointly face external threats to regional stability. Can you tell us more about this?


I believe that the majority of states in the region, as well as others worldwide, admit that Turkey has become the biggest threat. What do we see today? We see the Turkish aggression in the Eastern Mediterranean, Libya, Syria, Iraq, Armenia, as well as in Nagorno-Karabakh.

We will also see Turkey’s blackmailing of the EU and member states on the migration issue, sponsoring, training and equipping terrorist organisations, and their military presence in a number of other countries.

Therefore, the role of Turkey is a very destabilising one, not only in local but also in a global sense. What we can do today in the face of the threat of Turkish expansionism. We should be united, and we should cooperate. That is what we are doing right now with Egypt and other partners.

Half of Nagorno-Karabakh’s population reportedly displaced due to clashes

Government follows up on waste-to-energy project in Abu Rawash