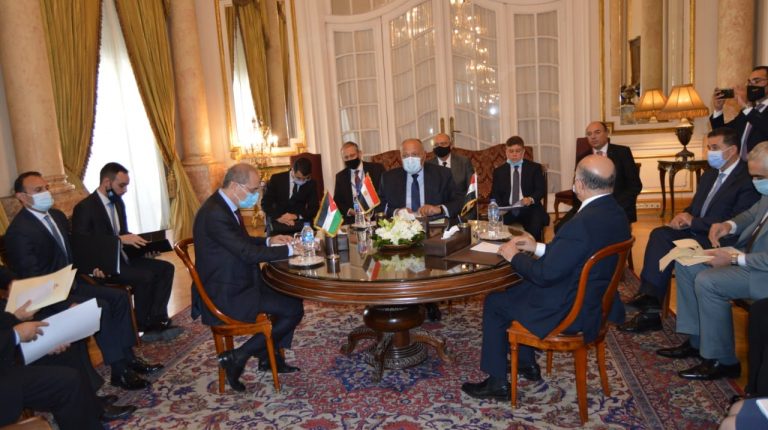 Egypt’s Minister of Foreign Affairs Sameh Shoukry met with his Iraqi and Jordanian counterparts, on Tuesday, to discuss cooperation in energy, reconstruction, and electricity.

Speaking at a press conference following the trilateral meeting with Iraq’s FM Fuad Hussein and Jordan’s FM Ayman Safadi, Shoukry said they agreed on activating cooperation between the three countries. The cooperation will be set up to serve the three nations, particularly focusing on political and economic consensus.

The ministers also addressed political issues, agreeing on putting a halt to any foreign interference and supporting the Arab region’s stability. Shoukry added that Egypt, Iraq, and Jordan have a common vision for preserving Arab national security, in addition to addressing the common challenges in the region.

The meeting also addressed the Palestinian issue, whilst asserting the need for a political settlement to the issue, Shoukry said.

During the meeting, the ministers reviewed the latest developments in Syria and Libya, and the importance of reaching political solutions and preserving state sovereignty whilst eliminating the terrorism.

Safadi said that the meeting discussed methods for implementing the cooperation plan between the three countries. He also said that the novel coronavirus (COVID-19) pandemic demonstrated the inter-dependence of Arab countries, and that they are looking to devote further efforts of mutual cooperation in various sectors.

The Jordanian minister praised Egypt’s efforts in solving the Libyan crisis in a way that preserves the country’s sovereignty.

Safadi said that water security plays an important part in Arab security, whilst asserting Jordan’s support for Egypt’s position regarding the Grand Ethiopian Renaissance Dam (GERD). He added that Jordan stands by Egypt in the latter’s efforts to reach an agreement that preserves its right to River Nile water.

Meanwhile, Hussein said that the discussions with his Egyptian and Jordanian counterparts included the implementation of reconstruction projects in Iraq. The meeting also discussed ways of integrating electricity, medical, and agriculture services between the three countries.

He added that Iraq will benefit from the input of Egyptian and Jordanian companies in reconstruction projects in the country.

At the Amman summit, the third to be held in such a format, the three heads of state agreed to boost trilateral cooperation in economic, political, energy and security affairs. The cooperation will be put in place as part of the efforts against the novel coronavirus (COVID-19) pandemic.

On Monday, Shoukry announced that Egypt and Iraq have agreed to boost joint cooperation in a range of fields, including development and technology.

Noteworthy, Egypt’s Minister of Planning Hala Al-Said will visit Iraq by the end of October, along with several other ministers, to enhance relations between the two countries.