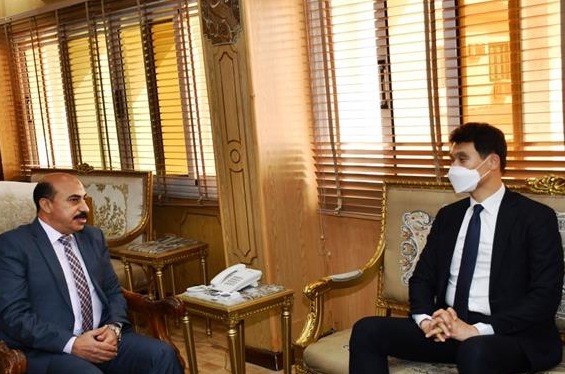 The Republic of Korea’s Ambassador to Egypt, Hong Jin-wook, paid a visit to Aswan, on Monday, where he met with Aswan Governor Ashraf Attia and officials from Aswan University.

During the meeting, the two sides discussed possible ways to enhance cultural and economic exchanges between Egypt and South Korea.

Hong congratulated Gallab on the graduation of the first batch of Korean language students, and noted that Korean companies operating in Egypt and the wider Middle East are seeking graduates from Korean language departments.

On the sidelines of the visit, over 500 Korean books were donated to the Korea Corner, a cultural space established by the Korean Cultural Center in Egypt at Aswan University. The donation is set to provide a wide range of educational and cultural resources to the Korean language department students.

Later on Monday, Ambassador Hong visited Atia at his office, where they discussed means for boosting mutual cooperation between the two sides. The ambassador shared his thoughts on Aswan becoming a major city in terms of Korea-Egypt cooperation.

Hong said that his country is willing to become a great partner in the process of infrastructural and local economic developments in Aswan.

The Korean Ambassador highlighted that the city, with its precious natural landscapes and cultural heritage, has become one of the famous travel spots among Korean tourists. He also suggested nurturing ‘city-to-city cooperation’ with Aswan, and promised to undertake all efforts to attract more Korean investments to Aswan.

Hong reviewed South Korea’s success in combating the novel coronavirus (COVID-19), saying that his country is ready to share its experience with Egypt in terms of disease control and quarantine methods.

In the last part of the visit, Hong held a dinner meeting for Aswan University’s Korean language students, to listen to their visions for the development of Korean language education in Egypt.