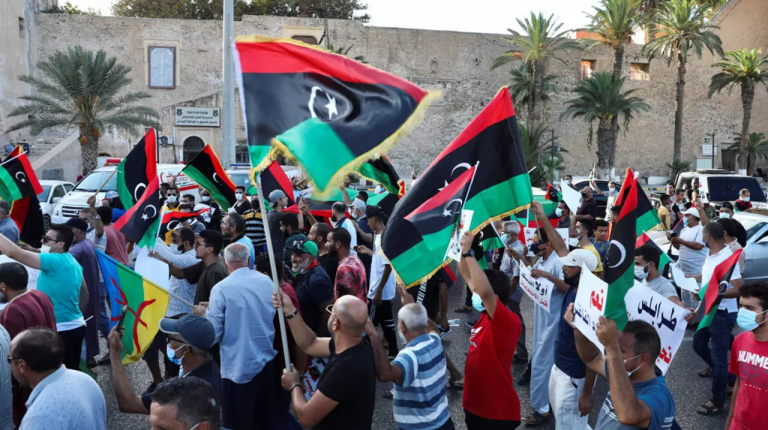 Hundreds of Libyans marched in the capital Tripoli, early on Wednesday, to protest deteriorating living conditions and denounce corruption in the war-torn country, according to several media agencies.

Angry at extended water and power cuts as well as long lines at petrol stations, the mostly youthful protestors marched in the streets of the city centre, chanting slogans including “No to corruption!”

Libya, which sits atop Africa’s largest proven crude oil reserves, has endured almost a decade of strife since the 2011 NATO-backed uprising that toppled and killed former dictator Muammar Qaddafi.

The war-weary country is plagued by water shortages and power blackouts that snuff out air-conditioners in the searing summer heat. The situation has been compounded by the novel coronavirus (COVID-19) pandemic, which has depressed global oil prices and spread in the country despite social distancing measures.

Protestor Ahmed Al-Amin told Daily News Egypt that he, and many others of his generation, “do not see any light” at the end of the tunnel.

“We are stuck between two governments that are fighting for power and money, while we cannot find our basic needs,” Al-Amin said.

Some of the protesters in Tripoli carried white flags to show their lack of allegiance to any of Libya’s main factions, as well as pictures of leaders of the two warring sides with their faces crossed out in red.

Ignoring restrictions in place to curb the spread of the coronavirus, the protesters marched in front of the building housing Libya’s Government of National Accord (GNA), before gathering in Martyrs’ Square.

Police vehicles and security forces were present at the march, according to witnesses and videos shared on social media. Al-Amin said that police forces attempted to disperse the gathering and dismiss protestors, firing in the air to do so.

The protest comes just days after the country’s warring rival administrations announced separately that they would cease all hostilities and hold nationwide elections.

The surprise announcement on Friday was made by Fayez Al-Sarraj, head of the UN-recognised GNA, and Aguila Saleh, speaker of the eastern-based parliament, backed by Commander Khalifa Haftar of the Libyan Arab Armed Forces (LAAF).

Haftar had launched earlier an abortive offensive in April 2019 to seize Tripoli. The LAAF has received backing from the UAE, Egypt and Russia in a conflict that has become an arena for regional rivalries. Front lines have settled for weeks round the LAAF-held city of the coastal town of Sirte, and Jufra to the south.

The area where Al-Amin lives was later closed off amid heavy security. Libya’s Ministry of Interior blamed “infiltrators” for violence against peaceful protesters that left one person injured, and said it was investigating.