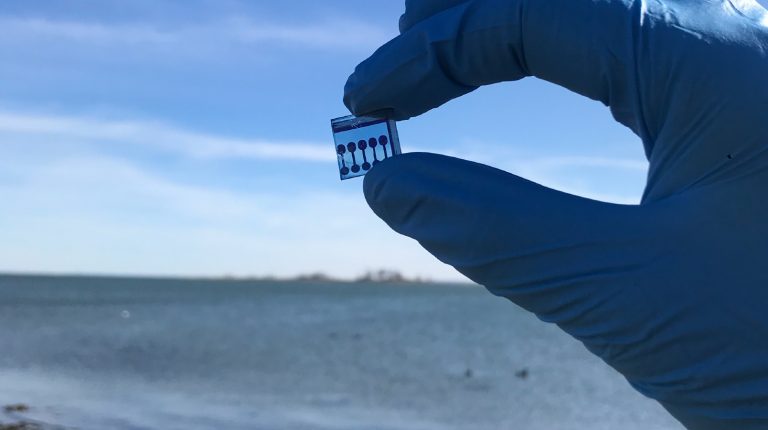 Research recently published by researchers from New York University in Joule found that scientists may have overlooked organic and inorganic materials that could be used to harness sunlight underwater and efficiently power autonomous submersible vehicles. The report develops guidelines for optimal band gap values at a range of watery depths, demonstrating that various wide-band gap semiconductors, rather than the narrow-band semiconductors used in traditional silicon solar cells, are best equipped for underwater use.

“So far, the general trend has been to use traditional silicon cells, which we show are far from ideal once you go to a significant depth since silicon absorbs a large amount of red and infrared light, which is also absorbed by water–especially at large depths,” says Jason A. Röhr, a postdoctoral research associate and study’s co-author. “With our guidelines, more optimal materials can be developed.”

Underwater vehicles, such as those used to explore the abyssal ocean, are currently limited by onshore power or inefficient on-board batteries, preventing travel over longer distances and periods of time. While solar technology takes off in land and in space, there is unchartered territory underwater, where submersibles have more freedom to roam. However, a unique challenge of submersible solar energy is that water scatters and absorbs much of the visible light spectrum, soaking up red solar wavelengths even at shallow depths before silicon-based solar cells would have a chance to capture them.

Most previous attempts to develop underwater solar cells have been constructed from silicon or amorphous silicon, each having narrow band gaps best suited for absorbing light on land. However, blue and yellow light manages to penetrate deep into the water column even as other wavelengths diminish, suggesting semiconductors with wider band gaps not found in traditional solar cells may provide a better fit for supplying energy underwater.

To better understand the potential of underwater solar cells, Röhr and colleagues assessed bodies of water ranging from the clearest regions of the Atlantic and Pacific oceans to a turbid Finnish lake, using a detailed-balance model to measure the limits of efficiency for solar cells at each location. Solar cells were shown to harvest energy from depths of 50 meters in Earth’s clearest bodies of water, with chilly waters further boosting the cells’ efficiency.

The researchers’ calculations revealed that solar cell absorbers would function best with an optimum band gap of about 1.8 electronvolts at a depth of two meters and 2.4 electronvolts at a depth of 50 meters. These values remained consistent across all studied water sources, suggesting that solar cells could be tailored to specific operating depths rather than water locations.

Röhr noted that cheaply produced solar cells made from organic materials, which are known to perform well under low-light conditions, as well as alloys made with elements from groups three and five on the periodic table could be ideal in deep waters. Even though the substance of the semiconductors would differ from solar cells used on land, the overall design would remain relatively similar.

“While the sun-harvesting materials would have to change, the general design would not necessarily have to change all that much,” says Röhr. “Traditional silicon solar panels, like the ones you can find on your roof, are encapsulated to prohibit damage from the environment. Studies have shown that these panels can be immersed and operated in water for months without sustaining significant damage to the panels. Similar encapsulation methods could be employed for new solar panels made from optimal materials.” Now that they have uncovered what makes effective underwater solar cells tick, the researchers plan to begin developing optimal materials.

“This is where the fun begins!” says Röhr. “We have already investigated unencapsulated organic solar cells which are highly stable in water, but we still need to show that these cells can be made more efficient than traditional cells. Given how capable our colleagues around the world are, we are sure that we will see these new and exciting solar cells on the market in the near future.”

5 science events to look forward to this year

A positive outlook for renewable energy investments in Egypt