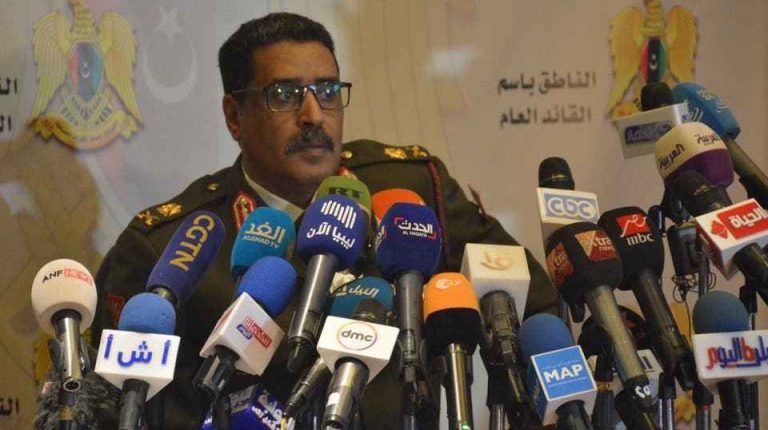 Spokesperson of the Libyan Arab Armed Force (LAAF) Ahmed Al-Mesmari announced on Sunday that the Turkey forces in Libya have built radar and missile stations near the northwestern city of Misrata and Mitiga International Airport in the capital Tripoli.

During a press conference held in Cairo, he said the clashes in Libya aimed at preventing the militias from exploiting the ceasefire, explaining that the person who lead the operations in Libya is a Turkish person called Abu al-Furqan.

He added that Turkey had deployed 7,500 Syrian mercenaries in Libya, in addition to 1,000 Turkish soldiers, asserting that Turkish President Recep Tayyip Erdogan sends to Libya around 300 mercenaries per week. While about 2,000 terrorists from Al-Nusra Front and the Islamic State had arrived to the country.

Al-Mesmari said the Muslim Brotherhood in Libya “controls” the Central Bank of Libya, “spending billions of Libyan dinars on supporting militants.” He added that the faction leaders who support the Turkish intervention in Libya have received financial rewards.

Meanwhile, he expressed his hopes that the new UN envoy in Libya “will not enter Libya through the wrong door, as Ghassan Salame and his predecessors did.”

The “real door” is to address Libya’s main issue which is achieving security, the spokesperson said, pointing out that the LAAF wants fair elections which represent the Libyan people’s will.

According to Al-Mesmari, the redrawing of maritime boundaries with Turkey had forced Libya into unnecessary battle.

Last Friday, new clashes broke out between the LAAF and troops affiliated to the Government of National Accord (GNA), south Tripoli and northwest Gharyan city.

Libya has remained in chaos, divided into rival military and political camps based in the capital Tripoli and the east since 2014. The LAAF, led by Khalifa Haftar, is based in eastern Libya, controlling most of Libya’s oil fields and facilities, but oil revenues are controlled by the Central Bank in Tripoli.