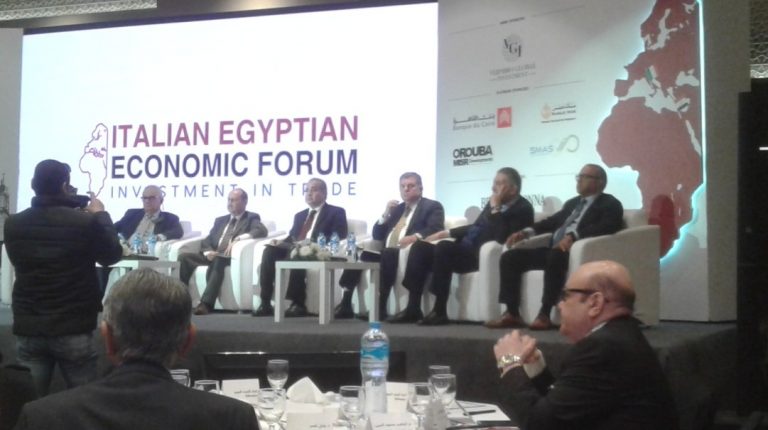 Italy offered to support Egypt in implementing its national internal trade development strategy, the Minister of Supply and Internal Trade, Ali El-Moselhy, said during the inaugural session of the 2nd Italian-Egyptian Economic Forum held on Wednesday.

The forum is held on 18-20 December with the participation of about 13 companies. It includes workshops and B2B meetings between both sides for boosting joint cooperation.

The Italian delegation participating in the forum met with Egypt’s Prime Minister Mostafa Madbouly on Wednesday morning, when he reassured his praise of Egypt-Italy deep relations, stressing that Rome is one of the most important partners to Egypt.

Italy is one of the top seven partners to Egypt with great contribution to developing the Egyptian economy, El-Moselhy mentioned.

“We invited the Italian delegation for the second Italian-Egyptian forum in Cairo after the success of the first edition in Napoli, Italy.”

Egypt’s economic reforms have encouraged foreign investors, including the Italians, to inject new investments in the Egyptian market, El-Moselhy added, noting that the Egypt has the fastest growing economy in Africa and one of the most promising in the world, with a 6% GDP growth in the fiscal year 2019/20.

The Central Bank of Egypt’s foreign reserves are high, and the unemployment and inflation are declining, El-Moselhy stated. He added that Egypt continues to implement its reforms guided by political leadership’s directives that pay great attention to improving the business environment and protecting intellectual property rights.

The Egyptian government is keen on facilitating foundation procedures of new companies in order to attract more foreign direct investments to the country. El-Moselhy said that Egypt is the Northern gate for Africa while Italy is an important partner from Europe.

Egypt is teeming with potentials after concluding free trade agreements with several African countries, El-Moselhy added, pointing out that the forum will witness intensive discussions between Italian and Egyptian companies to benefit from those agreements.

Moreover, Minister of Trade and Industry Amr Nassar said the forum is a real opportunity to discuss future cooperation between both sides, stressing the private sector’s key role in supporting both economies to make full use of available investment and trade opportunities.

Egypt and Italy enjoy a long-standing business cooperation especially in the field of solid waste management and trade, Nassar mentioned, asserting that his ministry will boost its manufacturing cooperation with Africa that will positively reflect on the continent’s relations with its foreign partners including Italy.

Additionally, Minister of Public Enterprise Sector Hisham Tawfik said his ministry is keen on boosting the transportation cooperation with Italy through re-operating the maritime line between Alexandria and Venice that deputed in 2008 by Gosoor (Bridges) project, adopted by the ministry to enhance foreign trade between Egypt and Eastern and Central African states. Tawfik said Gosoor will complete its initial services by mid-2020.