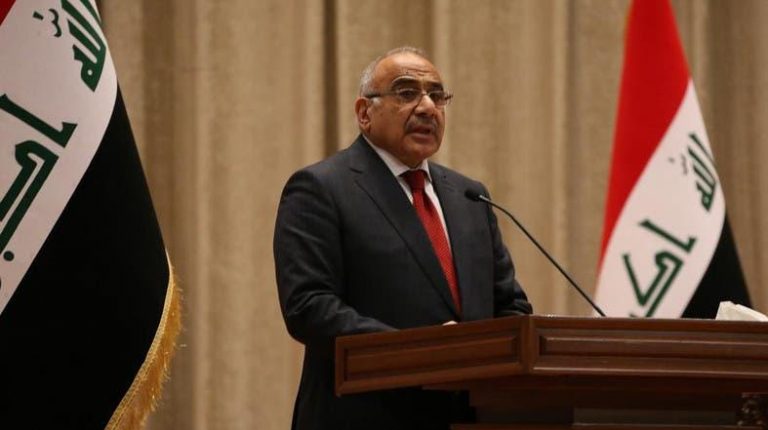 Iraq’s Prime Minister Adel Abdul Mahdi renewed his intention to resign to the Iraqi parliament during an emergency meeting of the cabinet on Saturday to discuss his resignation.

This came after he published a statement on Friday afternoon announcing his intention to soon submit his resignation to the Iraqi parliament.

“I will submit to parliament an official memorandum resigning from the current prime ministry so that the parliament can review its choices,” he said, explaining that he will officially submit it on Sunday.

Abdul Mahdi was appointed prime minister just over a year ago as a consensus candidate between political blocs.

He also said that he “listened with great concern” to Iraq’s spiritual Leader Ali Al-Sistani’s sermon and made his decision in response to his call in order to “facilitate and hasten its fulfilment as soon as possible”.

Al-Sistani said parliament, which elected the government of Abdul Mahdi, should “reconsider its options” in his weekly Friday sermon delivered in the holy city of Najaf via a representative.

“We call upon the House of Representatives from which this current government emerged to reconsider its options in that regard,” Al-Sistani said in the statement.

Al-Sistani also said protesters should distinguish between peaceful demonstrators and those seeking to turn the movement violent, following the burning of an Iranian consulate building in Najaf on Wednesday, that government officials say was perpetrated by saboteurs from outside the protest movement.

The announcement follows weeks of nationwide protests, which have left at least 320 people dead and 15,000 injured.

On Thursday, security forces killed at least 40 people during 24 hours of bloodshed amid spiralling violence in the capital and Iraq’s south.

In a statement on Friday, the Supreme Council of the Judiciary in Iraq will hold violators accountable for their objection to peaceful demonstrations, and put the maximum penalty against them, in accordance with the penal laws in force in Iraq.