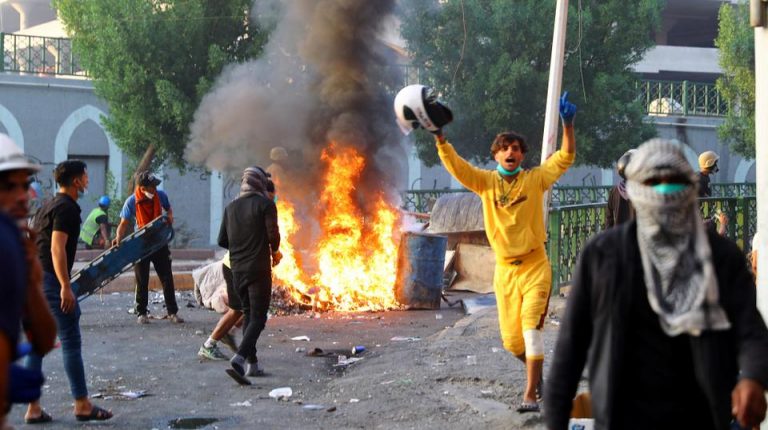 The death toll has risen to 305, while nearly 15,000 were injured since the start of October’s anti-government demonstration, after Iraq’s political class has reached a consensus to protect the Prime Minister Adil Abdul-Mahdi against the mass protests, said Agence France-Presse (AFP) on Saturday.

At least four protesters were killed on Saturday, when security forces cracked down on protesters in Tahrir (Liberation) Square in Baghdad, reported the Iraqi High Commission for Human Rights  (IHCH), after political leaders agreed to stand by Mahdi’s government.

Meanwhile, in the southern city of Basra, three other citizens were killed and dozens wounded, when security forces cleared a protest camp outside the provincial government headquarters.

At least 23 students were injured in Nasiriyah city southeast of Baghdad, after Iraqi forces accidentally sent off a tear gas cannon on Sunday hitting a nearby intermediate school for girls, witnesses told CNN. It is not clear what the condition of the students is, as Iraqi authorities have not commented on the incident.

Saturday’s clashes came after Iraqi leaders agreed to support the PM to remain in office.

The agreement was reached after a series of meetings which included gatherings led by Major General Qasem Soleimani, commander of the Iranian Revolutionary Guard.

A source who was present at the meetings told AFP that Soleimani has met top leaders from Najaf and Baghdad. “Those meetings resulted in an agreement where Abdel Mahdi would remain in office. They agreed to end protests with any means possible and to reopen bridges and shuttered streets,” he added.

The AFP reported that Soleimani had also held meetings with Muqtada al-Sadr, an Iraqi Shia cleric and the main supporter for the protesters, in addition to Mohammed Ridha Sistani, the son of Iraq’s top Shiite cleric, Ayatollah Ali Husseini Sistani. However, Sistani’s office has denied the report which claimed that he has agreed to support the embattled Iraqi prime minister, along with Soleimani and Sadr.