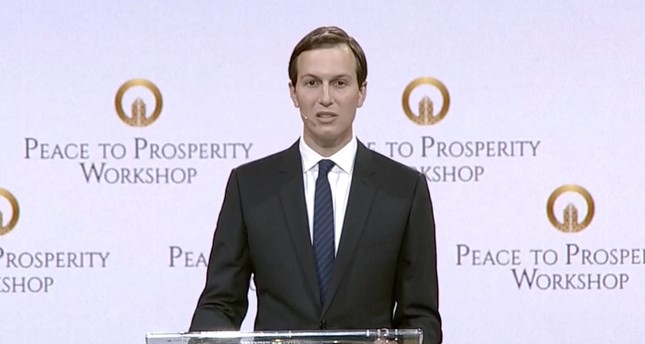 Trump’s son-in-law and senior advisor Jared Kushner on Tuesday described his plan for the Middle East as “the opportunity of the century” for the Palestinians, noting that their acceptance is a pre-condition to peace.

Business delegates and government officials gathered at the Four Seasons Hotel Bahrain Bay in Manama for the Trump’s administration-led $50bn economic ‘Peace to Prosperity’ workshop, which is scheduled to start late Tuesday.

The two-day international meeting, is led Jared Kushner, which the Palestinian Authority is boycotting, will discuss the US-led proposals for an economic vision.

“I think we all have to recognise that if there ever is a deal, it’s not going to be along the lines of the Arab peace initiative,” Kushner said on Tuesday.

“I say the Palestinians, America has not giving up on you, the plan will lead to a better future for the Palestinian people, peace can only be achieved if it comes with a pathway for people to change their lives,” Kushner added.

The blueprint envisions a global investment fund to lift the Palestinian and neighbouring Arab economies, and is part of broader efforts to revive the Israeli-Palestinian peace process.

Yet, the political side of the plan remain a secret, and the conference is not attended by Israeli or Palestinian governments officials.

However, the economic plan which was released on Sunday, was immediately called into question when Palestinian President, Mahmoud Abbas, who reiterated his opposition and confirmed he would boycott the two-day Peace to Prosperity conference. While, chief Palestinian negotiator Saeb Erekat said Kushner is “committed to the initiatives of Israel’s colonial settlement councils.”

The United Nations Secretary-General, Antonio Guterres, said on Tuesday it was important “to pursue peace efforts to realise the vision of two states, Israel and Palestine, living side by side in peace and security.”

Egypt sent an official economic delegation from the ministry of finance to attend the conference to hear out the propositions, a high-ranking Egyptian official told Daily News Egypt on condition of anonymity.

On Monday, the Foreign Minister Sameh Shoukry refuted any claims that the plan includes any land swaps, stressing that “Egyptian state will not give away any inch of the Sinai Peninsula to any country.”

Moreover, US National Security Adviser, John Bolton, warned Iran on Tuesday not to disrupt a Bahrain conference on Middle East peace, amid soaring tensions between Washington and Tehran.

“Iran has engaged over the past couple of months in a long series of unprovoked and unjustifiable attacks,” Bolton said.
“In that kind of environment, threatening the conference in Bahrain is always a possibility,” he added.

Trump’s ‘deal of the century’ will include $50bn of investments in Palestine, Egypt, Jordan, Lebanon: Kushner

Ahead of ‘Bahrain workshop’, Abbas opens fire on ‘deal of century’