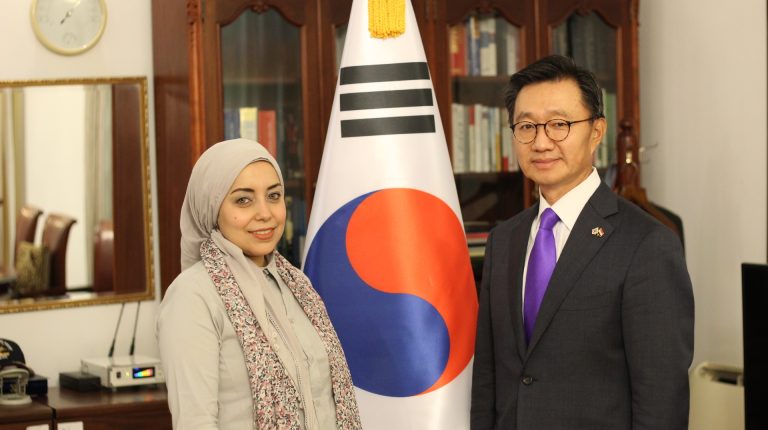 South Korea is seeking more opportunities in Egypt’s major transportation projects to contribute to the improvement of the living conditions of the Egyptian people, South Korean ambassador to Egypt, Yeocheol Yoon, said.

“We have actively engaged with Egypt to develop the urban transportation infrastructure, including the Cairo Metro and railways,” the ambassador affirmed, adding that Korea has shared its expertise with Egyptian counterparts on the application of the automated fare collection system for the public transportation system in Cairo and Alexandria.

The visit by the Deputy Minister for Economic Affairs of South Korea’s Ministry of Foreign Affairs (MoFA), Yun Kang Hyeon, that lasts from 18 to 21 June, will help improve the understanding of the Korean government and businesses on the potential of Egypt’s economy and its strategic importance, the ambassador added.

Daily News Egypt interviewed Yoon on the occasion of the deputy minister Yun’s visit to shed light on the diversified aspects of cooperation with South Korea with special focus on the business areas, the transcript for which is below, lightly edited for clarity:

Initially, what do you think of the recent economic reforms in Egypt?

The economic reforms adopted by President Abdel Fattah Al-Sisi are showing signs of success. There is a noticeable improvement in the country’s economic indicators, supported by higher GDP growth rates, increased investments and exports, and a pickup in tourism. The deficits are under control and unemployment rates are coming down. The inflation of May surged, but the core inflation rate went down, and I think the government can manage it.

The reform is not an easy path, but rather full of challenges, however Egypt is moving on the right track for development. International organisations and financial institutions are in tune to recognise Egypt as one of the world’s fastest growing economies.

The Korean government and businesses are following these developments with great interest and admiration, which I believe was not possible without a strong leadership as well as the great support of the Egyptian people.

How do you assess Egypt’s investment climate, and what are your recommendations to attract more foreign direct investments (FDIs)?

The investment climate in Egypt has significantly improved over the past few years, which is reflected in upgrading Egypt’s credit rating and more investment inflows.

The Egyptian government has been exerting its utmost effort to overhaul the business practice and address investors’ difficulties. Yet, there are areas that can be further improved for more FDIs to come into Egypt, most notably facilitating issuance of work permits and visas for foreign business people, streamlining customs procedures and clearance processes, enabling access to information, and updates on legal and regulatory changes.

In this context, Korean companies, namely Samsung SDS and LG CNS, have expressed willingness to take part in the projects which aim to improve the efficiency of tax systems and customs process.

What is the significance of Beni Suef governorate to the Koreans?

If Egypt is a gateway to Africa, as often described, we see Beni Suef as a cradle of skilled technicians in the country. Located in the Upper Egypt, Beni Suef used to be one of the most underdeveloped governorates in the country. However, now it is becoming an emerging manufacturing hub of Egypt through strategic cooperation with Korea.

In line with the Egyptian government’s plan to stimulate industrial growth in the Upper Egypt, two major Korean companies, Samsung Electronics and Ulhwa Textiles, built factories in Beni Suef in 2013 and 2017, respectively.

Samsung Electronics exports electronic products “Made in Egypt” to 36 countries in the Middle East, Africa, and Europe, including Saudi Arabia, the UAE, Mali, Ivory Coast, and Russia. Ulhwa also exports its production to the Middle East. The operation of these factories contributes to providing thousands of job opportunities in the region.

To facilitate the operation of the two major companies and the industrial development of the region, the Korea International Cooperation Agency (KOICA) is establishing the Korean-Egyptian Technological College in Beni Suef. Once established, the college will contribute to creating the base of more qualified labour forces equipped with the right skills and expertise.

We hope our Beni Suef project will be a successful model of bilateral cooperation which can be replicated and spread across the country.

Can you elaborate on the Korean-Egyptian Technological College?

During President Al-Sisi’s visit to South Korea in 2016, the two countries agreed to establish the Korean-Egyptian Technological College in Beni Suef. Since then, the Korean government, through the KOICA, has provided $5.83m for the establishment of the college.

As the college is scheduled to open in September this year, the KOICA is looking ahead in preparation for the opening. The KOICA will be responsible for developing curriculums for two faculties (Mechatronics and ICT), delivering equipment for college operations, and providing training for teachers. Student recruitment, also, will be started soon, following the discussions between the KOICA and the ministry of higher education and scientific research.

As a mismatch between education and skills needed in the labour market has been one of the critical challenges in Egypt, the college aims to support higher vocational education and strengthen linkages between education and industrial needs. In that regard, Samsung Electronics in Beni Suef is an excellent partner to achieve this goal. The KOICA and Samsung Electronics in Beni Suef have recently shared common understanding on the project and will continue the discussion on the possible opportunities for creating connection between vocational training systems and employment of the graduates from the college.

What is the size of Korean investments in the Egyptian market?

Korean investments in Egypt show an upward trend, reaching around $570m in 2018, mostly in the areas of electronics, textiles, and petrochemical industries. We have around 40 Korean companies operating in Egypt, and this number is expected to increase in view of Egypt’s great potential and its improved investment climate.

Korea as well is adopting a new investment approach by reaching out to new markets, beyond the US, Japan, China, and the East Asia region. In that sense, Egypt emerges as an important destination and partner in the African region and we are encouraging Korean companies to come and expand their businesses here.

We have several success stories. Last year, for instance, two Korean companies produced and exported ‘Made in Egypt’ products of around $700m.

What was the size of Egypt-Korea trade exchange in 2018?

The trade exchange between South Korea and Egypt reached $2.2bn last year. Exports from Egypt to Korea surged almost 250%, while Korean exports to Egypt increased merely by 39.4%. There was a big increase of gas exports to Korea. The Zohr exploration and production comes into effect in our trade as well.

There is one item to which we need to pay attention. More than $30m worth of bagasse were exported last year to Korea.

Bagasse is the residue that remains after sugarcane stalks are crushed to extract their juice. South Korea makes animal food from it. It is a win-win trade.

Korea’s exports to Egypt have a wide variety of goods and materials from cars, electronics, and chemicals. A big portion of our exports are used by Korean factories to add value to them in Egypt and export to the region. Korean electronics companies such as Samsung and LG exported more than $700m in 2018. This takes more than 90% of Egypt’s exports in electronics and home appliances.

What about the Egypt-Korea trade exchange in the first quarter (Q1) of 2019?

Our trade exchange with Egypt in Q1 of this year has been sluggish. It is mainly due to the global trade slowdown. Notably, there is a decrease of our exports to Egypt in cars. It is viewed that the Egypt-EU free trade agreement (FTA) affected our exports of cars. This is a clear case of negative impact of trade diversion from the FTA because the Egyptian people cannot buy Korean cars of good quality and competitive price. The tariffs difference between Korean cars and those of the EU’s – 135% vs 0% – is a significant block which needs to be addressed as soon as possible to give a level playing field to Korean companies.

Can you please elaborate on Korea’s cooperation with Egypt in the field of transportation?

Korea has been actively engaged with Egypt to develop urban transportation infrastructure, including the Cairo Metro and railways, as we believe development of the transportation sector is highly linked with the safety and convenience of the citizens of Egypt.

Starting from Korea’s supply of 20 air-conditioned trains to the Metro Line 1 in 2012, which was worth around $350m, Korea took on the project for the modernisation of the railway signalling system on Nag Hamady and Luxor corridor in Egypt in 2016. In 2018, the Korean government decided to financially support the supply of an additional 32 trains for Metro Line 3 as well.

We have also extended our cooperation to capacity building and knowledge sharing in the field. From 2016 to 2018, the KOICA has offered training programmes to 90 Egyptian officials on railway and metro management. And from 2017 to 2018, Korea has shared its expertise with Egyptian counterparts on the application of automated fare collection systems for the public transportation system in Cairo and Alexandria.

What is the Korean company that implements the oil refinement project in Egypt?

GS Engineering and Construction, a Korean company specialised in construction with high engineering, has been undertaking the Egyptian Refinery Company (ERC) project, one of the largest construction projects in Egypt.

Through the ERC project, for the first time, Egypt will have locally produced diesel meeting international standards. It will produce approximately 4.2m tonnes of transportation fuel per year including 2.3m tonnes of diesel and 0.6m tonnes of jet fuel.

Accordingly, Egypt’s dependency upon imported petroleum products will be reduced dramatically. The Egyptian government will also benefit from this over EGP 1bn each year by reduced transportation and insurance costs, eliminated product shipment losses, and generated revenues through storage and processing fees.

Moreover, the project has provided over 11,000 jobs during the construction phase. Even after construction, more than 700 permanent positions will be created over its 25 years of operations.

From the environmental perspective, this project will reduce the amount of sulphur dioxide (SO2) released into the air by 186,000 tonnes/year, lowering the overall amount in Egypt by 29%.

What about the business missions between Korea and Egypt in 2019?

The February business mission from Egypt to Korea was very successful. With two ministers, one from finance, Mohamed Moeit, and Sahar Nasr from investment and international cooperation, in addition to Mohab Mamish, chairperson of the Suez Canal Economic Zone (SC Zone), they successfully attracted the attention of Korean business people to the Egyptian market.

From our side, the Korean Chamber of Commerce and Industry is preparing a business mission. But they would like to create a business council first which can work as a counterpart of the Egypt-Korea Business Council currently chaired by Khaled Nosseir, chairperson of Alkan Holding.

In this regard, the visit by Yun Kang Hyeon, will improve the understanding of the Korean government and businesses on the potential of Egypt’s economy and its strategic importance as well.

What are the latest Korean tourist arrival figures?

More than 20,000 Korean tourists visited Egypt in 2018, compared to only 15,600 in 2017, which is a big leap. Among many tourist attractions, Koreans, so far, love to visit Cairo, mainly for the Pyramids, the Sphinx, and Luxor/Aswan, the home of intact ancient Egyptian temples. Recently, Red Sea diving spots are gaining more attention in Korea, prompting many young Koreans to visit Egypt.

In response to the recent tourist boom, I have noticed that Korean Air is planning to operate 13 more charter flights to Egypt from September to February in 2019/20.

The Egyptian government’s continuous efforts to enhance stability and eliminate terrorism will encourage more Koreans to visit the country and, hopefully, the resumption of regular direct flights between the two countries by the near future.

Construction of EGP 17bn Alexandria Metro to start in 1Q 2020

KCC to launch Quiz on Korea Competition on Wednesday