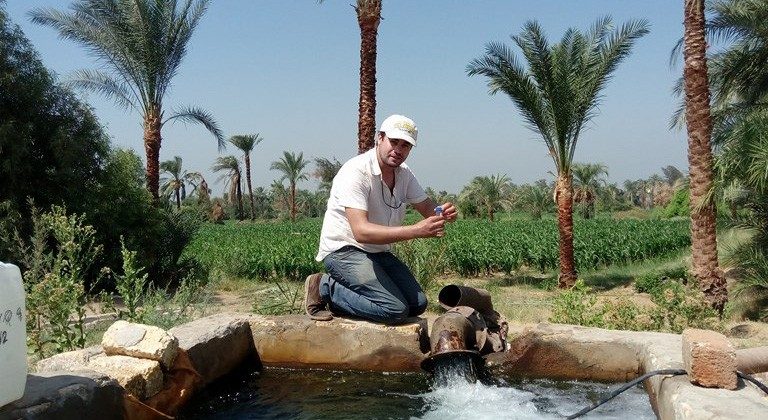 Researchers at the University of Delaware used chlorine isotopes as chemical tracers to determine the age and origin of groundwater from the Eastern Desert of Egypt.

The paper recently published in the Earth and Planetary Science Letters journal said that in order to measure the age and origin of the groundwater, 29 samples were collected from different wells during several field expeditions in Egypt.

The researchers used the long-lived radioactive isotope chlorine-36 to estimate the age of the groundwater. This isotope forms in the atmosphere and travels to the earth and has a half-life of 300,000 years.

The researchers analysed chlorine abundances and stable chlorine isotope ratios to decipher sources of chloride and to estimate subsurface residence times of groundwater from the Nubian Sandstone Aquifer System (NSAS), alluvial aquifers, and fractured basement aquifers in the Eastern Desert of Egypt.

Chemical and isotopic data indicate that dry fallout of marine aerosols and evaporated vadose-zone residues from precipitation which recharged the aquifers may have been the main sources of groundwater solutes.

Neil C Sturchio, professor and chair of the Department of Geological Sciences in UD’s College of Earth, Ocean and Environment, said that the Eastern Desert is interesting because while it is still dry and arid, it gets more rain than the Western Desert of Egypt.

“In the shallow aquifers you would expect young water, perhaps 50-100 years old, because it’s coming down as rain and flowing out toward the Nile Valley,” said Sturchio. He added in the press release of the paper that in some of these aquifers, the researchers found water that’s apparently 200,000 years old.

Sturchio said that while the water is probably not actually 200,000 years old, the fact that it appears that way shows that older water from the Nubian aquifer comes up along faults in the rocks and mixes in with the shallow water, carrying some of the older chlorine with it.

According to Sturchio, while Egypt is lucky that it has a lot of water from the Nile, there is only so much water that can be taken out of the river according to an international agreement. That is why it is critical in areas like the Eastern Desert to identify and use these groundwater resources.

“The young groundwater that comes down as rain and takes about 50 to 100 years to flow to the Nile is being used for irrigation in some places. But some of the water they’re pumping out comes from the much older groundwater in the aquifer underneath,” said Sturchio.

He added: “You really want to know how much of that water you can pump out before you’re over-pumping it and using it up too fast. Ideally, you don’t want to pump it out faster than it can replenish itself. Knowing the groundwater age is part of the basis for developing a good strategy for using it.”