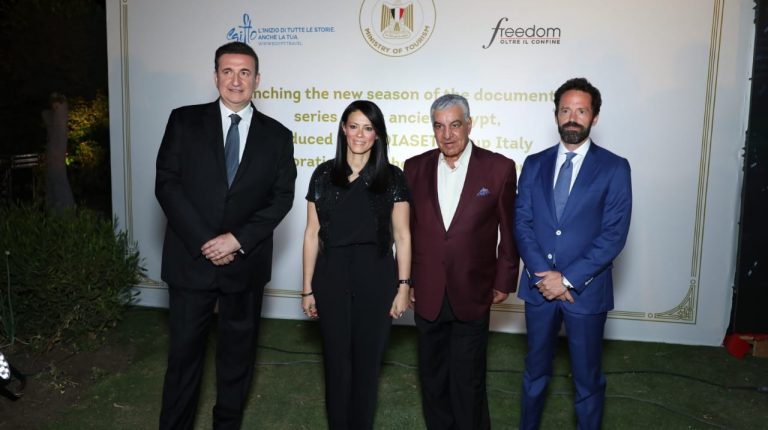 The Italian television will start presenting on 22 May a number of documentary films, which will present the pyramids and the history of Egyptian civilisation, as part of the promotion campaigns of the ministry of tourism in order to promote Egyptian tourist destinations and to attract more tourists toward Egypt, according to Egyptian Minister of Tourism, Rania Al-Mashat.

Her remarks came during the launch ceremony of the new season of documentary series produced by the Italian media group MediaSet-the largest media group in Italy-on the secrets of ancient Egyptian civilisation, in cooperation with the Egyptian Ministry of Tourism.

Al-Mashat revealed that the films will be broadcasted in the Freedom-Oltre Il Confine programme, which is hosted by the famous Italian broadcaster Roberto Giacobbo, who has been presenting his adventures in the archaeological areas of Pharaonic Egypt for the past 23 years.

Furthermore, Al-Mashat expressed her happiness with the great success achieved by the first season of the programme, which disclosed some secrets of the ancient Egyptian civilization.

Notably, the first season was broadcasted during the period from 28 December 2018 up to 14 February 2019, consisting of 12 episodes which received the highest ratings among the channels of the Italian state television Rai, Mediaset. Meanwhile, the average rate of viewing ranged from one and a half to five million views per episode, according to the Italian channel.

“Subsequently, it was agreed to shoot another series of episodes on Egypt, including more than 13 new episodes filmed in Aswan, Abu Simbel, Abidos, Sohag, Luxor, Giza, and Saqqara,” the minister divulged.

For his part, Giacobbo explained that in light of the increasing desire of the Italian viewer to learn more about the new secrets of the ancient Egyptian civilisation, the programme devoted a new section, namely “special permits” in its new season, noting that the new season was filmed in places which are considered unknown to tourists.

“Among, these places Osiris in the temple of Abydos and the well of Osiris in the pyramids area, as well as the tomb of the ambassador who wrote peace agreement terms with the Hittites during the reign of Ramses II,” the Italian presenter explained.

Construction of Grand Egyptian Museum to be completed by year’s end and partially opened in mid-2017: Minister of Antiquities