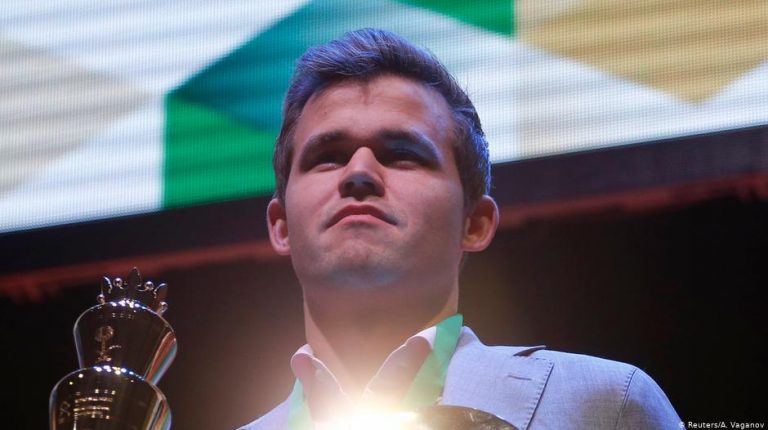 Magnus Carlsen is on form again. The Norwegian will face his World Championship rival Fabiano Caruana at the Grenke Chess Classic tournament in Baden-Baden and Karlsruhe. A big young talent is set to represent Germany.Magnus Carlsen was in good spirits as he took part in the Shamkir tournament in Azerbaijan. That comes as little surprise, as the chess world champion finished the tournament with a two-point advantage at the top of the table. A 5:0 win in the Champions League final in football terms.

One thing is certain: Magnus Carlsen, chess world champion since 2013, is enjoying the game again. This wasn't the case just a few months ago at the world championship game in London. Asked about his favorite player, the Norwegian gave an insight into his spiritual side.

"My favorite former player is probably myself, three, four years ago,” he said.

Carlsen's sister even speculated that he could retire. However, there is no noticeable sign of tiredness now. In Shamkir, Carlsen eased past many of his top-class opponents. He's put his opposition under more and more pressure by targeting the opposing kings. The Norwegian was perhaps inspired by the latest developments in computer chess.

An application called Alpha Zero has been shaking up the chess scene for more than a year, using so-called neural networks. The computer teaches itself the game so well that it doesn't only beat human opposition, but also conventional chess programs.

Alpha Zero as a role model?

The way Alpha Zero wins games received lots of attention in the chess scene. The program is not perfect defensively, but it turned out to be an aggressive attacker. Magnus Carlsen has surely watched carefully. Those that watched him in Shamkir had the impression that he had changed his game orientation in accordance with the program's, and was successful at it.

His fans would naturally want his run of form to continue in the Grenke Chess Classic event in Baden-Baden and Karlsruhe, starting on April 20. In this year's most important chess tournament to be held in Germany, Carlsen is set to play against Fabiano Caruana again, who has always took the initiative in his style of play, but has not been in good form since the World Cup.

Other names to take part are India's former world Champion Vishy Anand, still one of the best players in the world, Armenia's Levon Aronian and world number eight Maxime Vachier-Lagrave from France, or "MVG," as he's often referred to, who could be a threat to Carlsen and Caruana.

None of the German players are likely to finish in the top spots. However, respectable performances are expected from Germany international Georg Meier, as well as the country's highest ranked player Arkadij Naiditsch.

However, a 14-year-old schoolboy from the outskirts of Mainz is at the center of attention. Vincent Keymar is regarded as the biggest German talent in 50 years. This will be his first chance to compete with the world's best. Keymar is not officially a Grandmaster, but that did not prevent him from beating some top players in the past.

His first game against Magnus Carlsen will be the highlight of the tournament from a German perspective. Will the world champion be playing against his possible successor?