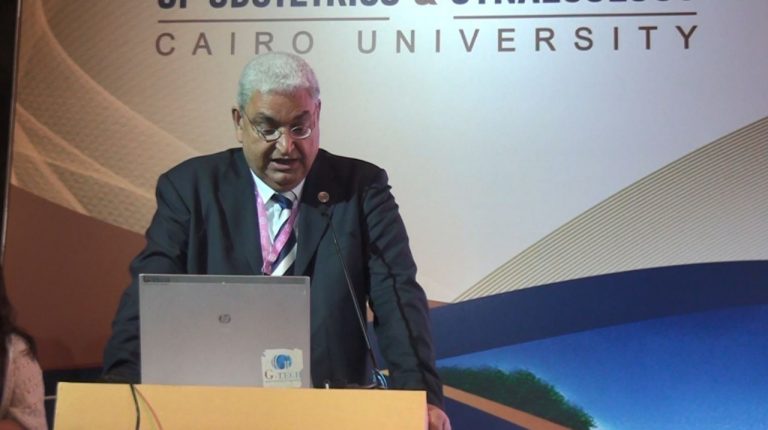 Egypt is ranked first in terms of the rate of caesarean deliveries in the world, Abdel-Maguid Ramzy, head of the Obstetrics and Gynaecology Department in Al-Qasr Al-Eini Faculty of Medicine, Cairo University, told Daily News Egypt in an interview during the 20th Annual International Conference of Obstetrics and Gynaecology Department of the Faculty of Medicine in Al-Qasr Al-Eini.

The president of the conference explained that the Obstetrics and Gynaecology Department of the Faculty of Medicine in Al-Qasr Al-Eini chose the topic of the caesarean section in Egypt as a main theme of the conference, in a rapid response to the warning issued by the World Health Organization regarding the problem of caesarean sections in Egypt, where the latest statistics indicate that the year 2018 witnessed a rise in the proportion of caesarean sections in Egypt and its complications which rose to 57% of the cases, and became the first in the world.

“Also, this year, we focused properly on raising awareness about the spread of unwarranted medical caesarean operations and the consequent complications, including bleeding during childbirth, which may lead to the death of women during delivery, in addition to the complications that may happen in the placenta,” Ramzy added.

Notably, this conference is considered one of the largest training events in the field of Obstetrics and Gynaecology, and it is held with the aim of reviewing the latest researches in Egypt and the world in order to improve the medical service provided to patients, especially in the infertility cases as well as tumours of the female reproductive system and laparoscopies.

Ramzy explained that the Obstetrics and Gynaecology Department of the Faculty of Medicine in Al-Qasr Al-Eini are working on two axes in order to decrease the rate of caesarean deliveries.

He stated that the first one is related to the doctors, mentioning that the conference trained doctors on many important topics over two days through 30 sessions and over 132 lectures.

By asking the doctor when it is preferred for the mother to have a caesarean delivery, he stated that there are two reasons, the first one is related to the mother herself if her pelvis is small or if she has a small body, while the second reason is related to the baby if he/she is overweight, or is in a transverse position, or if there are multiple babies.

“My advice to every woman during her pregnancy is to eat very healthy food and stay away from fast food, artificial additives, and to do some kind of exercise throughout her entire pregnancy, in order to avoid a caesarean delivery,” he stated.

For her part, Hala Salah El-Din, Dean of the Faculty of Medicine, Al-Qasr Al-Eini, stressed the importance of the conference which all gynaecologists and obstetricians in Egypt anticipate yearly due to its workshops that provide continuous education for doctors.

“I advise young doctors to attend to continuous education, which must be a basic goal and a duty of every doctor to follow-up on all the latest research,” Salah El-Din advised.

She asserted that society will not rise without health and education, highlighting the importance of the health sector, indicating that the state pays great attention to it. Salah El-Din also highlighted that there are several initiatives and many laws which are being discussed in the House of Representatives to improve the doctor’s life and education.

Breast Cancer most common type of cancers among women in Egypt: WB

Work that bump: Why exercise matters during pregnancy