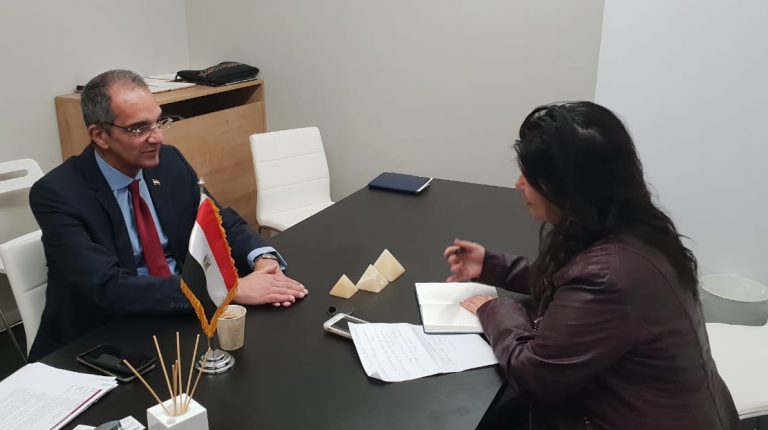 He stated that the ministry is targeting more than 12% growth. Egypt’s ICT sector achieved a growth of 14% in the first quarter (Q1) of this fiscal year (FY), Talaat said, mentioning that it achieved 16.5% growth in Q2, which was the highest growth rate among the country’s other sectors.

As for the digital transformation, the minister stated that Egypt will launch an e-platform on 30 June, with the aim of digitalising governmental services that citizens receive in Port Said.

“Through this project, we target 25 main services in Port Said, some of which were important to mention in detail, such as health insurance,” Talaat added.

According to the project, the minister explained that there should be digital service outlets, noting that these outlets should be implemented or designed to cover all the demands of the different segments of Egyptian people, regardless their level of education.

In that context, Talaat declared that his ministry created four service outlets in Port Said, one was designed for those who can easily deal with modern technology, the second for mobile men, the third for Egypt Post services, the fourth will work as a call centre.

In terms of the development of Port Said’s infrastructure, Talaat stated that the ministry is currently working on developing the infrastructure, reinforcing fiber optic cables, in order to reach all the governmental bodies located in Port Said.

Port Said will be the first governorate applying this system, Talaat said, assuring that the government will continue subsequently to launch this project and enhance the infrastructure across the different governorates in Egypt.

Talaat explained that there are many goals behind digitalising government services, including facilitating services provision, improving citizens’ lives, and rationalising state’s expenditures.

“Subsides should be delivered to the neediest people, and this will not happen unless we use a digital system, to determine the actual beneficiaries of subsides,” he assured.

Talaat stated that digitalisation is part of a broader plan which is digital inclusion, explaining that the digital inclusion means providing the citizens with a range of services and tools through digital systems. Thus, we started now with the government services.

Talaat noted that Egypt signed on Wednesday with Microsoft a binding contract, for setting up the first Microsoft data centre in Africa and the Middle East region, based in Telecom Egypt in the Smart Village.

Notably, Telecom Egypt and Microsoft signed a binding contract to set up the first computing cloud in Egypt. A delegation from Microsoft moved to Cairo immediately to start work in this centre.

Talaat said that this agreement comes within the Egyptian approach to conclude similar contracts with the four largest companies in the world of data retention, namely Amazon, Facebook, Google, and Microsoft, adding that this contract also reassures major companies to invest in Egypt and gives a new international certificate that the investment climate is safe.

“We target to become a hub for data centres as we have the required criteria and elements that allows us to achieve that,” the minister said.

Talaat noted that the proposed data centre would small in terms of storage volume, however this is not a concern, as it is a normal thing to begin small then expand in size as the number of clients will increase.

Regarding the draft law of data protection, Talaat stated that it is still under discussion by the Parliament, noting that it is very important as it will help in attracting a lot of foreign investments.

He explained that investors are always looking forward to work in a safe and well-legislative environment which provides skillful human resources, and seeks investment incentives, such as tax exemption.

He noted that this draft law was formulated based on the European Union’s similar law.

Commenting on his visit to the Ericson pavilion at the MWC, the minister stated: “I have been shown very promising technologies, really a breakthrough advancement. I was interested in several 5G applications in areas like health, ambulance, consumption management, power,” he said.

Road development continues to be GCC’s top priority with projects worth over $122bn: report

Future of cash: will it become obsolete?

We must have national strategy for digital financial inclusion: Moussa