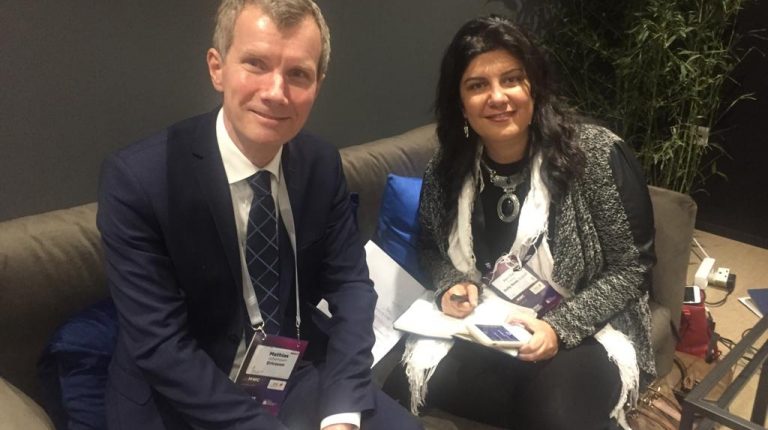 Barcelona-Mathias Johansson, the head of the Global Customer Unit (GCU) at STC, and the head of Ericsson Saudi Arabia and Egypt told Daily News Egypt in an interview on the side-lines of the Mobile World Congress (MWC) that this week will witness several announcements related to the Middle East and 5G.

Johansson continued that what is interesting is that not only the US, Japan, Korea, and China are interested in launching the 5G, but also the Middle East region is.

“I think it is interesting to see that the Middle East wants to be at the forefront of 5G, they see 5G as a technology where they do not want to be left behind the wheel, and they really want to be at the global front, not only when it comes to the 5G deployment of networks, but also in identifying use cases,” he said.

“In Saudi Arabia, we see that telecom operators are paving the way for the adaption of 5G technology, especially the enterprise use cases for different industries, as 5G is a great opportunity to enhance the revenue side, basically to make more money,” Johansson said.

“We also see the same in the other GCC countries, as well as a great momentum for driving use case innovation. At Ericsson, we are also looking into that,” Johansson stated.

“We have a couple of plans to launch innovation hubs throughout the Middle East, to make sure that they can provide a network, but we can also help both operators as well as application providers or academia to innovate on 5G,” he said.

“We see a great interest in particularly the GCC countries, we also see that the handset industry is moving quickly, as it announced by handsets device manufactures that 5G handsets will be released this year,” Johansson added.

Talking about the mobile handset industry, Johansson expressed that in his opinion, the handset change will happen quicker than anticipated.

“I think nine months from now, most of the top line handsets such as Samsung, LG, and even the cheaper ones, will have 5G mass volume of devices to be sold, which will help drive the usage not only in the US and Japan, but also in Saudi Arabia, UAE, and in many other places,” he stated.

Moreover, Johansson is very optimistic that this year will be very interesting, in terms of the 5G network.

Regarding his company’s announcement with Telecom Egypt (TE), he explained that the infrastructure currently being built by TE will be ready for 5G, despite being built originally for 3G or 4G services.

“TE is looking ahead for the future, not only for the current or the past phases,” as Johansson praised the company.

By asking Johansson about the statement of Ericsson’s CEO during his speech at the MWC as he said that Egypt will launch the 5G a little bit later, he explained that the GCC countries are going at a quicker pace as they already started building the necessary 5G infrastructure and towers, while Egypt did not start building yet.

He explained also that most consumers in Egypt have 2G and 3G mobile phones only, however the operators invested a lot in the 4G networks, in comparison with Saudi Arabia for example where the 4G network traffic is very big therefore it is time to start working on the 5G. Yet, 4G is still growing in Egypt.

He explained that Egypt is a different case as it is a big market, having a large population which is 100 million people, thus in terms of consumers, it serves many different segments, assuring that Egypt has a chance to invest in modern technology.

Moreover, Johansson explained that if only a small percentage of the 100 million people prefers 5G, this makes Egypt an interesting market as it will be a market need for anything, starting from the SMS up to the latest 5G innovation for smart manufacturing.

“We believe that immediate use cases will fit Egypt very well,” he concluded.

In terms of the information security, he stated that having a secure 5G network is very important, not only for operators, but also for the society itself, assuring that Ericsson has a lot of solutions to ensure the security that the networks can only be accessed by the right people with the right access.

Without 4G, it was not possible to conduct current mobile broadband: Etisalat Misr