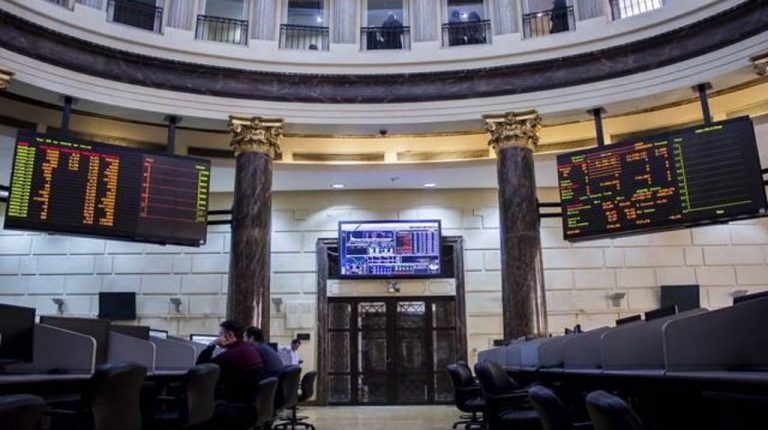 Egypt’s stock market is expected to move upwards in the week ahead as foreign investors are likely to build new positions in blue-chip stocks ahead of an imminent earning season. The market is also expected by analysts to benefit from cheap valuations which could entice more foreign inflows.

The EGX30 index is expected to target resistance at 13,775 points, while the small and medium-size companies EGX70 index may try to break above 685 points, said head of technical research at Roots Stock Brokerage House Sameh Gharib.

“The benchmark index has been in an uptrend last week, but a profit taking streak weighed on gains,” he added.

The Egyptian Exchange (EGX) is likely to start trading session in green territory this week on the resumption of purchases on blue-chip stocks, said head of the capital market committee at the African Economic Council Ayman Fouda.

Meanwhile, the small- and mid-cap EGX70 index may retest 705 points if it breaks resistance at 695 and 699 points, he added, pointing out that the index has support at 679 and 674 points.

For his part, Osama Naguib, head of Technical Analysis at Arab Finance Securities, said that purchasing power will maintain emerging, pushing the EGX30 index higher to hover around 13,400 points.

Trading volume is still not high enough to ensure the positive performance of the EGX, Naguib added, noting that the local stock market may see a sideways trend.

The capital increase proceeds will be used to cover the company’s liabilities until the end of 2019, GTH said in a statement to the EGX.

The Cairo-based firm will also allocate $500m (EGP 5.4bn) of the proceeds to refinance bonds due in the first half (H1) of 2019 in Bangladesh or to reimburse a part of the company’s debt.

The technical support cost worth $91m (EGP1.6bn) approved by GTH’s general assembly will be paid to VEON.

The company will allocate $15m (EGP 268.5m) of the proceeds for the company’s general activities.

GTH’s board of directors last agreed to raise the issued capital to EGP 13.9bn from EGP 2.73bn.

The board appointed NAEEM Holding as an independent financial advisor to evaluate the fair value (FV) of GTH’s stock. The company has set the FV of the stock at EGP 5.31 per share.

Meanwhile, Madinet Nasr Housing and Development announced it has generated EGP 5.5bn in contracts and reservations in 2018.

The Egyptian real estate firm has made a record by delivering 788 units in 2018, the statement added.

Madinet Nasr Housing previously reported a 15% year-over-year (y-o-y) jump in its profits for the first nine months of 2018.

Net profits amounted to EGP 869.07m during the period between January and September of this year, compared to EGP 757.14m in the same period of the prior year.

Sales reached EGP 792.8m in the nine-month period ended September, from EGP 555.36m in the same period of the previous year.

In other company news, the consolidated revenue of Orascom Construction is expected to range between $3bn and $3.5bn in 2018, the company’s Managing Director Osama Bishai said.

Bishai stressed that his company is focusing on the water purification projects in Egypt.

The company’s unit in the US may see a profitable year following tax cuts announced by the federal government.

In other market news, Italy’s Azimut Group has signed an agreement to acquire 100% of Rasmala Egypt Asset Management.

Under the agreement, Rasmala will be rebranded to Azimut Egypt Asset Management, according to a company statement released.

Rasmala is one of the biggest asset managers in Egypt. The value of company’s managed assets reached EGP 8.46bn in November.

In company earning news, Maridive and Oil Services reported a 24.4% y-o-y rise in net consolidated profit for the first nine months of 2018.

Net profit reached $18.28m in the period from January to September, versus $14.69m in the year-ago period, including minority shareholders’ rights, the company said in a filing to the EGX.

Revenues declined to $156.33m during the nine-month period ended September, versus $164.06m in the prior-year period.

At the level of standalone business, the company logged $1.04min profits in the nine-month period of this year, down from $4.25m in the corresponding period of 2017.

Revenues grew to $112.7m during the six-month period ended June, versus $100.5m in the prior-year period.