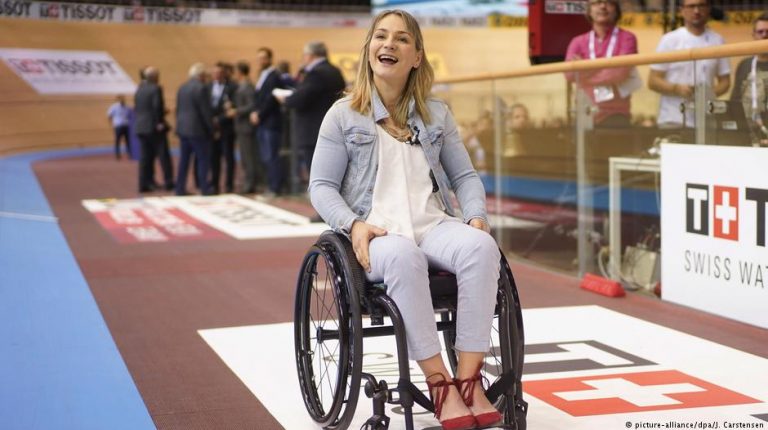 In June, track-cycling champion Kristina Vogel crashed during a training session in Cottbus. SHe has used a wheelchair ever since. She spoke to DW about how she’s adjusting to her new life.DW: How is your recovery going, six months after your accident?

Kristina Vogel: I haven't quite processed everything yet. There are still days when I wish that I was in a different situation. But it is what it is. I am no longer on two legs, but on two wheels. I'm now learning how to live life in a wheelchair. Some things are no longer possible and some things are completely different.

What have been the phases of your recovery over the past few months?

After the accident I woke up on the track and couldn't move my legs. I already figured that moment that I wouldn't walk again. When I woke up from the coma and I couldn't feel my legs, it was clear to me that I was a paraplegic. This allowed me to accept and mentally deal with the situation. The idea that there could be another chance did not occur to me.

What have you had to learn now that you can no longer get around as you used to?

The most important thing was to restore a basic physical stability. That things makes a lot easier. But when I pick up something heavy I still have to hold on to the wheelchair. In hospital everything is accessible for the physically challenged, but outside it's a different story. So my goal to be able to pick up a pot from the stove without having to hold on to the wheelchair as soon as possible.

Does being a professional athlete help you in your recovery?

As an athlete I'm quite muscular, of course. So I'm trying to activate them again. That is the most important part of my therapy. But it helps mentally too, because I know how hard work it is to become successful and that hard work pays off. I'm an incredibly ambitious patient. And sometimes I get on the doctors' nerves, because I'm too impatient with a lot of things.

Apart from your sporting career you are also a police officer. How will this affect your career there?

The police have been very helpful. They're giving me time to see what job I can do with my disability. I am also active in the German Olympics Sports Confederation and a year ago I was elected to the UCI Athlete's Commission. I'd like to continue to be active in those roles.

I understand you've tried out some new sports during your stay in the clinic, including archery. Is a career in the Paralympics on the cards?

There are plenty of opportunities in the clinic for me to try out new sports. Apart from archery I've also tried out bowling and basketball. I've also been in a canoe. It's all fun because it arouses my sporting ambition. Physically, however, I'm still a long way off from being able to consider professional sports. That will take another three or four years. And it would have to be a sport I'm as passionate about as cycling. If I return to professional sport, I want to be successful. I still can't stand losing.

People in Germany and abroad have touched by what happened to you. Have you been surprised by this, given the fact that track cycling isn't the most high-profile sport?

The outpouring of well-wishes has been breathtaking; it cheers me up and encourages me. I received a lot of fan mail in the hospital. There were also flowers, sweets or books from total strangers. It shows how valuable sport is, how it connects people, and how many people all over the world were pulling for me. Perhaps it has helped that I've met my current situation head on and accepted it. I also see this as a job; I want to show that you can overcome anything if you believe in yourself.

Until her accident during a training session at the Cottbus Velodrome on June 26, Kristina Vogel was one of the most successful track cyclists in the world. In 2012, the Kyrgyzstan native won gold for Germany in the team sprint at the London Olympics. At the 2016 Games in Rio de Janeiro, she won gold in the sprint and bronze in the team sprint.

The interview was conducted by Herbert Schalling.