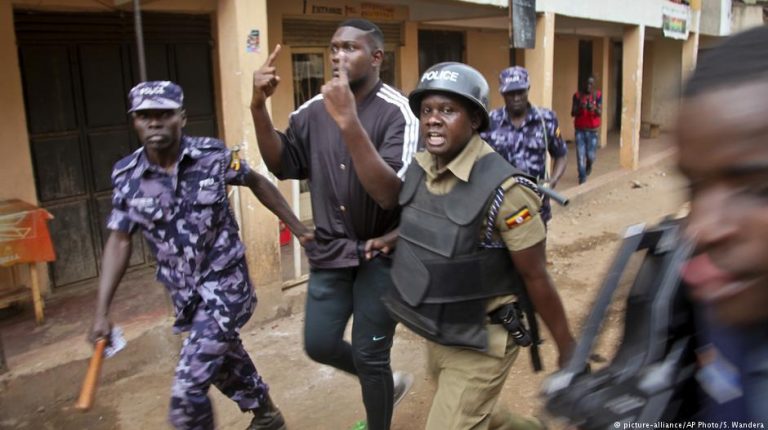 Depending on one’s viewpoint, the EU is either interfering or doing the right thing by drawing attention to the state of human rights in Africa. DW turns the spotlight on Uganda.Edrine Wanyama does not mince his words. "The situation of human rights in Uganda is deplorable," the lawyer and analyst told DW, an assessment that is confirmed by human rights organizations. From repression of freedom of speech and assembly, to police brutality, including torture and arbitrary arrests, the catalogue of documented violations makes for dire reading.

This is why many Ugandans welcome the help of the European Union (EU) in promoting fundamental rights in their country. "There are some good efforts [by the EU] to push the government to comply with key human rights obligations," Wanyama said.

Human rights are of the "highest possible importance" to the EU, the union's ambassador to Uganda, Attilio Pacifici, told DW. In the case of Uganda, the EU discerns some progress, "but not the kind of progress we feel comfortable with," Pacifici said. In 2012, the EU suspended aid to Uganda following the embezzlement of donor funds by high-ranking government officials. The EU is now back in Uganda trying to rebuild trust in a crucial partner, as the ambassador put it.

EU 'could do more'

Uganda is an important ally for Europe and the US in the fight against Islamist terrorism. In 2007 President Yoweri Museveni deployed Ugandan troops to help fight al Qaeda-linked extremists in Somalia. Museveni does not take kindly to criticism of his human rights record. He labelled accusations that opposition leader and musician Bobi Wine had been tortured "fake news" and has been known to accuse unspecified "foreign imperialists" of using international media and human rights defenders to achieve their own aims. But analyst Edrine Wanyama credits pressure exerted by the EU with having a direct impact on government policies. He calls Museveni's declarations "part of a political game."

For Ambassador Pacifici it goes without saying that diplomacy is paramount in dealing with foreign leaders whose take on human rights is different from that of the West. But "if you start digging, those values and principles are the same," he told DW.

While lauding EU efforts to promote human rights, civil society organizations and activists in Uganda believe the bloc could do more. Cissy Kagaba, executive director of the Anti-Corruption Coalition Uganda (ACCU), calls on the EU to "stop the rhetoric. Maybe action needs to be done before they release money," she said, referring to budget aid the union granted the government in Kampala.

The EITI as a stumbling bloc?

A first tranche of a total of €66 million ($75 million) is earmarked for investment in Uganda's justice, law and order sector. The government has complied with all the conditions set for the transfer which is scheduled for the end of the year, ambassador Pacifici said. That's all except one: a written statement that Uganda intends to join the Extractive Industries Transparency Initiative (EITI). Patience seems to be wearing thin on the European side: "A situation like not having the simple condition like commitment to the EITI fulfilled is really a big concern for us, because it doesn't bode well for the continuation of the implementation of this project," Pacifici said. At a later stage Kampala will have to present a report on the "implementation of key commitments concerning human rights," in order for further tranches to be paid out, he explained.

DW tried without success to reach the government of President Yoweri Museveni to find out about the reasons for the delay and Kampala's plans to ensure more respect for human rights.

The government's hesitation to commit to the EITI does not surprise Cissy Kagaba "because that means people are going to hold you accountable. Citizens are going to come up and demand information," she said. Activist Miria Matembe believes giving money to the government is wrong in itself. To promote human rights, all support should go to civil society, "which can mobilize the citizens and educate them about the rights, so that they can be able to stand up for their rights," she said.

On the streets of Kampala, opinions are mixed, with some residents rejecting what they see as foreign interference. "Personally I don't think they should, because when these agencies come to help us, they expect something in return, which is not fair. I believe we are civilized people and should sort this out," Mugisha Joseph said.

Other Ugandans feel very comfortable with the idea of the EU pressuring their government on the matter of respect for human rights. "These people need to be checked," said Joshua Sserwanja, a student from Makerere University. Brian Okwir called for help to teach people about their rights. "People will have to know about their rights so that they are not abused. I think the European Union has to play some role," he said.

EU ambassador Attilio Pacifici refuses to speculate about the future of human rights in Uganda. But he is sure of one thing: "There are so many people (in Uganda) committed and determined to do well in human rights."

Frank Yiga and Wambi Michael contributed to this report