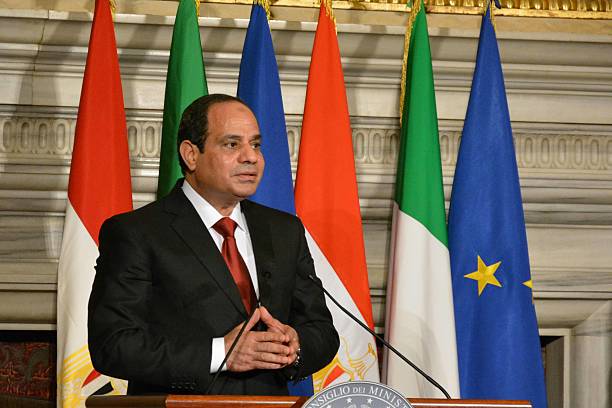 Egypt’s President Abdel Fattah Al-Sisi headed on Monday to the city of Palermo, Italy, on an official two-day visit to take part in the meetings of the summit of leaders who are concerned over the Libyan issue, according to a statement from Bassam Rady, the presidency’s spokesperson.

The summit will bring together key Libyan political factions and international partners to draft a plan to deal with the political crisis plaguing the country since 2014.

On Saturday, Al-Sisi discussed the Libyan crisis in a phone call with the Italian Prime Minister Giuseppe Conte, who invited the president to the summit which is being held from 12 to 13 November in Palermo.

During the conversation, Al-Sisi stressed that Egypt supports the exerted efforts towards reaching a political settlement in Libya, asserting the necessity of preserving Libya’s unity and strengthening its national institutions, which will contribute to the return of stability and security in the Middle East.

Since 2011, violence has erupted in Libya, when a popular uprising ended with the ousting and death of former President Muammar Gaddafi. Since the ousting of Gaddafi, the country has seen rival governments and parliaments in the west and east.

The meeting is believed to be part of the Italian efforts for limiting the French role in Libya, which has recently reached high levels after Paris hosted a meeting between the main Libyan rivals to agree on a political roadmap to resolve the disputed issues.

During that meeting, the Libyan rivals committed to building the rule of law in a sovereign, civilian and democratic Libya, working towards establishing a roadmap for the security and defence of the Libyan territory against threats and trafficking of all types.

AfDB to sign new entrepreneurship agreement with ASRT in November