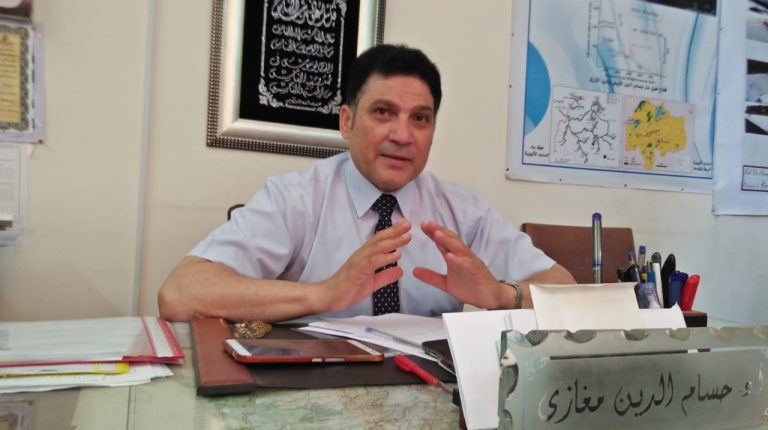 At a time when all Egyptians give great attention to the file of the Grand Ethiopian Renaissance Dam (GERD) and its impact on the Nile water and amid the conflicting news about negotiations regarding the issue with many rumours about Ethiopia filling the dam with water, we felt obligated to speak to one of the experts in this file. He headed the Egyptian delegation that took part in the meetings of the Tripartite National Committee on the Renaissance Dam, which started negotiations with the Ethiopian side and agreed, together with Sudan and Ethiopia, on the necessary studies to be conducted, in order to evaluate the impact of the dam on water share.

Daily News Egypt sat down for an interview with Hossam Moghazy, who evaluates the conduct of the negotiations and talks about the rationalization of water, in addition to some projects of the ministry, as well as ways to protect shores from climate changes and the way to provide new fresh water sources in Egypt. The transcript for which is below, lightly edited for clarity:

There is a great misunderstanding regarding these negotiations and many rumours to shake the confidence of citizens in the state and its ability to maintain the Nile water share.

It must be made clear that Egypt will not give up the rights of Egyptians in the Nile and the Ethiopian side is well aware of this.

Additionally, Ethiopia has pledged not to fill the dam before the studies carried out by specialized offices are done. Everything else is a lie.

Moreover, the Sudanese side is playing a positive role unlike what is being said, and it has helped us overcome many obstacles we faced in this file.

President Abdel Fattah Al-Sisi said, in a clear message to Ethiopia said that if the dam means development for them, Egypt understands and appreciates that, but to Egypt, it is a matter of life.

Do you think we delayed dealing with the file of the GERD for too long? When did we start giving real attention to it?

For sure there were delays. The real start was during the era of the Supreme Council of the Armed Forces in May 2012, when Prime Minister Essam Sharaf went to Ethiopia and it was agreed to nominate four experts and six representatives of the three countries (Egypt, Ethiopia, and Sudan), in order to submit a report on the details of the GERD. The report said that there are some uncompleted studies with the Ethiopian side. The international panel of experts has recommended that a specialized office would conduct hydraulic, hydrological, and environmental studies. However, during the era of Adly Mansour, the interim president, the three countries were not able to agree on who would conduct technical consultations. When President Al-Sisi took office, the process started moving. I was honoured to head the team of Egyptian negotiators in partnership with the Ministries of Irrigation and Foreign Affairs. Negotiations started in Khartoum and a roadmap was agreed upon.

You were one of the people who laid out a mechanism to choose an advisory office to evaluate the impacts of the GERD and tasks of this office. How was that process done?

The mechanism to choose an office was conducted by Egypt, Ethiopia, and Sudan. The same went for choosing the tasks and the number of experts. An assisting office with a respectable reputation and wide experience was also chosen. All financial and technical details were agreed upon. The cost was estimated to be €4.5m distributed equally on Egypt, Ethiopia, and Sudan. An English legal office was assigned to write contracts on behalf of the three countries. We have a clear work plan.

The advisory office has several tasks. It is assigned to figure out whether the dam would have a negative impact on downstream countries, and if so, what will the plan be to deal with this impact? The plan would include the number of years to store water, and the number of expected years of drought, through a joint cooperation mechanism between the three countries, through reports for water management, in order to make sure there would be an impact from the GERD on other countries. The study would also determine the kind of impact the dam would have on various water creatures, fish, sand soil, in addition to the negative impacts it may have on the economy, and whether it would have social impacts.

Who is the Egyptian body responsible for the file of the GERD?

The file of the GERD and Nile River is not the responsibility of the Ministry of Irrigation or the Ministry of Foreign Affairs. Everybody contributes with their knowledge and works as an integrated team. Egypt is negotiating, and it will be remembered that Egypt knocked all doors and negotiated with all bodies over the two years I took office. There is a cooperation between all statesmen.

How do you see the performance of the Egyptian negotiators so far?

The Egyptian negotiator is a patriot who has responsibilities and ambitions to solve this issue. He is aware that there are historical responsibilities on his shoulders and that history will have no mercy on him if he did not do his best, but at the same time, he is dealing with two countries with full sovereignty and cannot force them to do anything. The nature of negotiations is an art of reaching the best results with the least losses without giving up historic and acquired rights.

What are our negotiation tools? Are they sufficient?

We have several tools. First, the Nile is an international river and no country should have authority over it. There must be coordination and negotiations regarding the technical details to be studied, so if the Ethiopian side does not give prior notice to the Egyptian side, this gives would be in favour of the Egyptian side. Second, Egypt is a downstream country and has no other water resources except for the Nile because it is a rainless dry country, located at the end of the Nile’s journey. On the other hand, Ethiopia has rain and a soil proper for cultivation, unlike Egypt’s desert soil. Therefore this means we stand before a challenge, as long as we do not have other water resources.

Egypt had two routes to walk down. Either to negotiate or resort to international arbitration. Egypt resorted to negotiations because it respects its neighbours. Egypt has started the phase of building confidence after the interview with former President Mohamed Morsi. The interview left a bad impression regarding the Egyptian negotiation.

President Al-Sisi stressed that Egypt wants all the best for the Nile Basin countries, but also wants to guarantee it has its rights in life. If we managed to do this, we would give a good example on how to solve issues in peaceful ways through negotiations rather than escalate to international levels.

How do you see the frequent announcements about the completion of the construction of the GERD?

When I resigned, they said that 40-45% of the dam construction has been completed. Actually, these declared rates always represent the project expenditure ratio, because the dam construction has structural, mechanical, and electrical details. The dam may be structurally completed, but other aspects have not been completed. Therefore, the announced rate does not reflect the reality.

What about the measures adopted to rationalise water consumption after the ban imposed on rice cultivation in several provinces?

Egypt undoubtedly suffers from water poverty. The country’s annual average per capita of water is way less than the world’s, estimated at 1,385 cubic metres. This water poverty has nothing to do with the GERD. The government fined farmers EGP 2,800 for each feddan cultivated with rice. The first year of the decision was considered transitional with 50% reduction, hence that it can be increased gradually in the following years. This step came in preparation for the complete ban on rice cultivation in several provinces. Each feddan of rice consumes 3,000-5,000 cubic metres annually, compared to other crops such as corn, vegetables, and fruits. I support the recent government decision to allow importing rice to save water and face monopolists who raise the local price of rice in markets. The rationalisation of water consumption is an important mission that must be shared by the Ministries of Endowments and Education, the church and Al-Azhar. During my service in the Ministry of Irrigation, I used to coordinate with The Ministry of Education to hold competitions for students about the rationalisation of water and preventing its pollution. We also coordinated with the northern coast’s resorts to activate the desalination of sea water, instead of the Nile water. Some resorts have already started the desalination of sea water, while others are doing studies on the issue.

How will Egypt face the climate change effects on coastal cities, such as Alexandria and Kafr El-Sheikh?

Climate change is a scientific fact. It means a change in the statistical distribution of weather patterns when that change lasts for an extended period of time. Egypt is one of those countries overlooking the Mediterranean and will be affected by this change. For example, the Nile Delta will be subject to rising sea levels, but some people exaggerate about these effects. Actually, the Irrigation Ministry conducted intensive studies on the issue and found that Egypt will see an increase in sea level of 2 cm over 100 years. The ministry is also carrying out several coastal protection projects in Alexandria, Kafr El-Sheikh, Damietta, and others, to protect and mitigate these changes’ effects on the beaches.

What is the aim of the Mahmoudiyah Canal project?

The Mahmoudiyah Canal axis will contribute to the provision of a new traffic artery in the city of Alexandria, which helps to reduce the traffic jam, as well as eliminating the manifestations of neglect suffered by the Mahmoudiyah canal over the past years and improve the situation in the areas surrounding the course. The Faculty of Engineering in Alexandria University has been commissioned to carry out consultancy studies for this project, including architectural, irrigation, transportation, and traffic. An integrated team of the faculty is coordinating with the Northern Military Region and the governorate of Alexandria to put the finishing touches to the design of the project, in preparation for its implementation under the supervision of the Northern Military Region.

Some claimed that filling the Mahmoudiyah Canal will lead to water shortages?

How could you evaluate your term in office?

My term as minister of irrigation witnessed many challenges and mega national projects such as the 1m feddan project, which was then expanded to 1.5m feddan, the elimination of illegally built buildings on the Nile, the protection of South Sinai from floods, the revival of the Toshka project, tightening cooperation with the Nile Basin countries, and the GERD negotiations.

I do not think so. This project did not receive enough promotion because it was not easy to reach the location of the project. About 40% of the project, equivalent to 600,000 feddans, is located in Minya governorate.

Minister of Irrigation arrives to Khartoum to attend meeting on GERD

Death toll due to floods in Kerala reaches 324