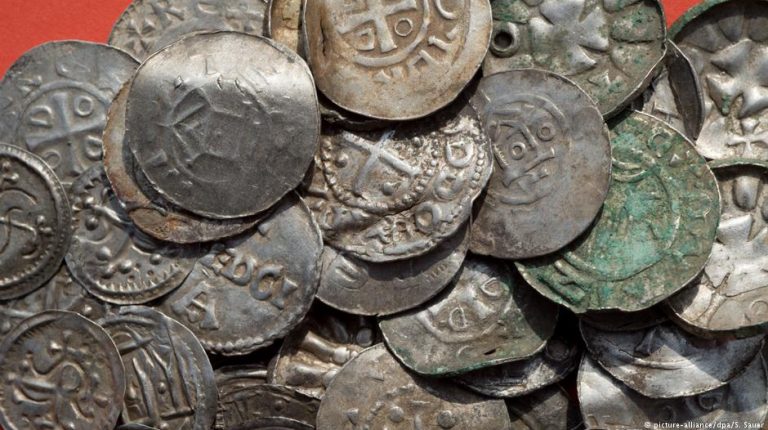 Archaeologists are thrilled with the discovery of a valuable cache of silver from the late 10th century on Germany’s largest island, with coins linked to the legendary Danish king Harald “Bluetooth” Gormsson.Archaeologists have unearthed bracelets, necklaces, rings, beads and brooches across an area of some 400 square meters (around 4,300 sq. feet) near Schaprode on the German island Rügen. They also discovered a so-called Thor’s Hammer pendent, as well as around 600 coins, 100 of which can be linked to the reign of the legendary Danish king Harald “Bluetooth” Gormsson. Bluetooth lived from 910 to 987.

“This treasure is the largest single discovery of Bluetooth coins in the southern Baltic Sea region and is therefore of great significance,” said Michael Schirren, archaeologist and excavation director with the State Office for the Preservation of Culture and Historical Monuments in Mecklenburg-Western Pomerania.

On the neighboring island of Hiddensee, gold jewelry linked to Bluetooth and his contemporaries was discovered back in 1872 and 1874.

Bluetooth (“Blåtand” in Danish), who was born a Viking, is considered the founder of the Danish Empire. He united Scandinavia, established Christianity there and initiated reforms. Historians report that, after losing a battle in the Baltic Sea region to his son Sven Gabelbart, the controversial ruler fled to Pomerania in 986, where he died one year later.

Incidentally, the Viking king’s nickname, inspired by his dead tooth with a shade of blue, was picked up Swedish company Ericsson to name its wireless technology standard, Bluetooth. The “B” of the company’s logo is also Bluetooth’s initials written in ancient Danish runes.

Ericsson to focus on developing operators’ networks towards 5G future