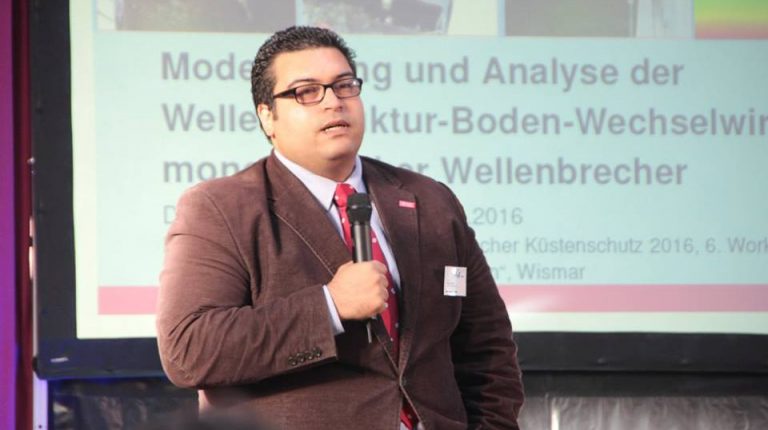 After finishing his bachelor’s degree in civil engineering and master’s degree in harbour engineering and marine structures from the f=Faculty of Engineering of Alexandria University, Hisham Elsafti was awarded a fellowship from the German Academic Exchange Service (DAAD) to complete his PhD in Germany. Daily News Egypt interviewed Elsafti to gain insight from his experience and learn about his journey in scientific research, differences between Egypt and Germany, as well as his views on the hydrological crises that face Egypt.

Where did you receive your PhD degree in hydromechanics and coastal engineering?

What are the main research achievements that you are proud of?

When I reflect on my career so far, my greatest pride is deciding on open-source software. I publish all the numerical models and tools I develop under the GNU General Public License, which is a free software license. In this way, anyone can download, learn from, and use my numerical models for further research, education, or for practical purposes. In this way, I can collaborate with other researchers and get feedback on my work. I publish my tools and models on the website www.geotechfoam.com. Publishing the code in this way is in alignment with the concept of open science.

Tell us more about your current work at the Leichtweiß-Institute.

I am currently the principle investigator (PI) of a research project funded by the German Research Foundation (DFG). Funding from the German Research Foundation is highly competitive as they fund, tentatively, one of each five applications they receive. My current research project deals, further, with studying wave attacks on gravity structures, like for example, gravity foundations of offshore wind energy devices. Gravity structures are massive structures that rely on their huge masses for stability. Through my work, I publish the advancements in the models we develop to construct a virtual laboratory for studying wave-structure-soil interactions, as mentioned earlier. Moreover, the advancements in our research are quickly integrated in my lectures for “numerical modelling of fluid-structure-soil interaction” for graduate students at TU Braunschweig.

How do you see the differences between scientific research in Egypt and in Germany?

Germany is, generally, very organised and structured. This also applies to their research infrastructure. This means there is an established system for each step of the research process. For example, to acquire funding for a research project, it is in most cases clear where you should apply and what the procedure is. Additionally, the decision process is very transparent. Of course, it could sometimes be overwhelming to deal with the huge amount of data available but the German organisations are always keen to reach out to the public and to researchers and they spare no effort in assisting applicants. Further, the whole system is constantly under revision and refinement, which allows for enough flexibility to meet new scientific challenges. Moreover, small- and medium-sized enterprises, which are the backbone of the German economy, can receive public funding for collaboration with research institutes.

On the other hand, in Egypt, it is much more difficult to acquire proper funding for research projects for many reasons, chief of which, for example in the engineering field, is the mostly broken link between the industry practice and research. This is not entirely the responsibility of researchers. The industry and stakeholders in Egypt need to employ scientific research to their advantage through investments that will return a higher quality and more cost effective product. The government should also encourage such collaborations by pouring public funding in this direction, which will in turn increase taxable profits.

On the bright side, Egyptian initiatives like the Science and Technology Development Fund (STDF) are steps in the right direction. However, in my opinion, the STDF and similar funding bodies should not mainly target patent-producing research as means of deriving economic profit; instead, they should promote open science. Public funding bodies worldwide originate from taxes and their added revenue is more taxes of a flourishing economy. Furthermore, the information circulation in Egypt can be much better in light of the available digital technologies.

Moreover, information exchange through conferences, seminars, colloquiums, etc play a vital role in forming a solid German scientific community, which means as a researcher, one has close contact to peers and each knows what others are working on, and in turn, it is possible to form collaborations. This, in some cases, crosses the barrier of disciplines to allow the formation of multi-disciplinary research consortia. In Egypt, however, research efforts are mostly scattered, as very little scientific events are organised and researchers do not have opportunities to initiate collaborations.

What are the main obstacles that you have faced (or still face) in working and conducting research in or about Egypt?

Through my master’s study and as a teaching assistant in Alexandria University, I was introduced to the conditions of Egyptian research. Egyptian researchers are, like most publicly employed Egyptians, underpaid. Additionally, due to the huge number of students admitted at Egyptian universities, the teaching staff is heavily overworked with teaching duties. Further, no funding was available for research, which meant one had to personally finance the research activities and take responsibility for gathering modern scientific references, which at the time was mostly not available to Egyptian researchers (this was before the introduction of the Egyptian digital international database). Moreover, there was no link between the university and the industry or relevant governmental organisations. This, of course, is not a perfect recipe. However, Egyptian researchers try to do their best with available means.

Doing research that involves information about Egypt is a very challenging task. Basically, field measurements in Egypt are generally not sufficient. Even if the data are collected by the authorities, it is hardly possible to get access to them due to many reasons, eg security, bureaucracy, etc.

How do we overcome these obstacles?

I think the problems that researchers face in Egypt are only symptoms of a deeper one, which is the way the Egyptian society regards science and research in general. The stereotype of a researcher in Egypt is mostly about someone who is isolated and not aware of the surrounding environment, working on crazy insignificant ideas and crying eureka or “I found it” everyday. Hence, research activities are considered as a waste of resources that can be put to better use for a developing country. Additionally, most Egyptians have the misconception that we are light years behind in technological advances and we cannot really catch up, which is also, in my opinion, not true.

In recent years, the situation has been enhanced for Egyptian researchers in reaching digital references or applying for funds from Egyptian collaborative initiatives with the European Union or the STDF. However, one cannot overlook how researchers in Egypt are underpaid and how very little research facilities are available. Egypt should put in place a masterplan for research that defines the objectives and goals Egypt needs from research, then competitive public funding calls should be communicated, maybe on a yearly basis, very clearly to researchers with sufficient time for them to prepare good plans and proposals to the funding bodies. Additionally, the government needs to invest in research as a long-term product than can be taxed in the future.

But most important is that the system in Egypt should be open to feedback and self-correct to better adapt to the Egyptian conditions and the dynamic international changes and advances in science and research.

How can Egypt handle the issue of the Ethiopian dam?

To handle the Ethiopian dam problem, two actions are urgently needed: first, a political solution to ensure the participation of Egypt in the decisions regarding water storage plans in Ethiopia, especially during the filling phase and in years of water shortage, and second, engineering solutions are needed to focus on increasing the efficiency of water use (including use of modern water efficient irrigation systems) and distribution (including reducing evaporation), reducing Nile pollution, and seeking other water sources, like water desalination. Here, scientific research can play a significant role in solving the Egyptian water crisis. In my humble opinion, Egypt should work tirelessly on resolving any existing or potential conflicts with Ethiopia.

How do you evaluate the governmental efforts in facing climate change and seal level rise in Egypt?

The Egyptian Coastal Research Institute (CoRI) and the Egyptian Public Shore Protection Authority (SPA) are the concerned Egyptian institutions operating under the umbrella of the Egyptian National Water Research Centre of the Ministry of Water Resources and Irrigation. The CoRI carries out research and investigations to protect and develop the coastal zones of Egypt by monitoring the evolution of the Mediterranean coast, especially the Nile Delta. It collects and analyses data on erosion and accretion patterns and their driving forces. They support the decision makers by selecting the most economical and effective protective measures along Egyptian coasts.

The Egyptian government is well aware of the threat of climate change and its effects on the Nile Delta and they are acting accordingly to mitigate the problems and are acquiring funds from international entities, which is fair considering the relatively low contribution of Egypt to global greenhouse gases. However, I think the Egyptian government should work on increasing the public awareness of this problem and initiate a large-scale public discussion to involve the society in planning for the future of this important region of Egypt, especially by acquiring feedback for the development of the integrated coastal zone management (ICZM) policy of Egypt. Additionally, the Egyptian universities need to be heavily involved in the development of mitigation measures and the ICZM.

Furthermore, more international collaboration to learn from the experience of other countries is really important and can be best achieved through Egyptian scholars and scientists abroad. Last but not least, the government should work out a way to realize the ICZM for the Nile Delta on the most fundamental levels of governmental operation. This means that the Egyptian decision makers should give more interest and consideration to the problem.