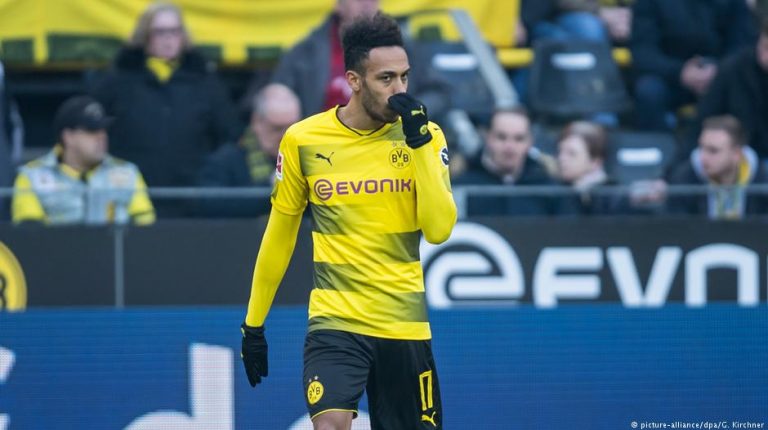 The Pierre-Emerick Aubameyang soap opera is a serious problem for Borussia Dortmund. But DW’s James Thorogood believes it is distracting from the club’s regression and the turmoil it has created.Met with boos and a banner reading “No player is bigger than this club”, Pierre-Emerick Aubameyang was the centre of attention as Dortmund were held in a 2-2 draw with Freiburg.

Before the game, sporting director Michael Zorc provided the latest update on the 28-year-old’s potential move to Arsenal saying: “Either our demands are met and the transfer will be complete or they aren’t met and ‘Auba’ will play in Dortmund until summer. This is how it is agreed upon.”

However, with Dortmund still winless in 2018, the result against Freiburg highlights that the problems stretch far beyond the transfer poker being played in the board room.

Heading in the wrong direction

When Dortmund won back to back titles in 2011 and 2012 they managed to surpass Bayern on the pitch even though they couldn’t compete with the Bavarians’ financial might.

In the years that followed, BVB have desperately tried to strike the balance between commercial interests and a passionate fan base. In their bid to close the gap on Bayern though, Dortmund have regressed in an alarming manner and now find themselves unable to compete on or off the pitch.

The turning point came in April 2016 when club CEO Hans-Joachim Watzke claimed it was “out of the question” that Mats Hummels, Ilkay Gündogan and Henrikh Mkhitaryan would all depart in the same transfer window.

It was a promise aimed at galvanizing the club. It was a promise that, despite some setbacks, Dortmund hadn’t lost direction in their pursuit posing a genuine threat to Bayern.

But more importantly, it was a promise that wasn’t kept.

Gündogan and Mkhitaryan landed either side of the Manchester divide, while Hummels became the latest example in a case study of how Bayern’s asset-stripping has stunted Dortmund’s development.

BVB tried to be active in the transfer market to compensate for their losses, but ended up buying four players that had failed to cut it at the highest level and four unproven youngsters.

Of those eight, only Ousmane Dembele, a potential building block for Borussia’s future, was of the caliber required to compete with Bayern. The fact the Frenchman outgrew the club in the space of one season is the most damning evidence of Dortmund’s demise.

This season, Aubameyang’s public flirtation with a move away from the club, coupled with his disciplinary issues stand as further proof that, in failing to keep a promise at the end of the 2015/16 season, BVB sent a message that they couldn’t sustain their challenge.

What does it say about the direction Dortmund is heading when the rumors of potential replacements for ‘Auba’ all revolve around strikers of inferior quality? The club are in a lose-lose situation.

While focus was put on the banners aimed at Aubameyang, the more pertinent message was sent to Neven Subotic: “A good person in a rubbish business… thank you Neven”, a damning indictment from Dortmund’s own supporters.

Dortmund wanted everyone to believe that their relative struggles last season were of no cause for concern. That was a much easier sell before being humbled in the UEFA Champions League group stages, starting the calendar year with three straight draws and public unrest.

In truth, instead of keeping pace at the top of the table, Dortmund have melted in the mediocrity of the chasing pack and are closer to being eclipsed by teams around them than they are to posing a threat to Bayern.

BVB may finish in the top four come the end of this campaign thanks to the inability of sides around them to capitalize on their slump, but until they stop papering over the cracks, their long-term aspirations will never be realized.