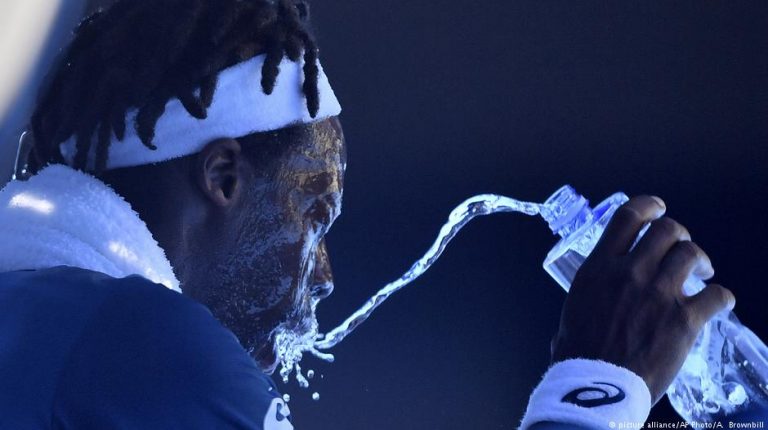 “I was dying on the court for 40 minutes.” Gael Monfils said after his loss to Novak Djokovic on the Rod Laver Arena.

Sweltering conditions are commonplace at the Australian Open, which is played during the Southern Hemisphere’s summer months.

But the scorching temperatures on Thursday had many calling for organizers to intervene.

The tournament has an extreme heat policy where referees can close roofs on the three main show courts or suspend play on the outer courts when temperatures rise above 40 degrees celsius.

“The health of our players is of paramount concern, but we need to be consistent with the outside courts so some don’t get an unfair advantage,” the tweet read. “The referee will initiate the Extreme Heat Policy once the ambient temperature exceeds 40C and the Wet Bulb Index (measuring humidity) exceeds 32.5C.”

While organizers decided that those limits were not reached, the on-court temperature reportedly reached 69 degrees, according to Australian broadcaster Channel Seven.

Monfils was particularly affected, staggering during his loss to Djokovic and requiring medical attention. At one point the French player retreated to his shaded chair without even returning his opponent’s serve.

“I got super dizzy. I think I had a small heat stroke for 40 minutes,” said Monfils. “It’s a bit risky.”

With time restricted between points to just 25 seconds, the conditions were made even more unbearable. Athletes were provided no leniency between sets with Djokovic even copping a slow play warning.

“At that time, the officials have to make a move. Maybe wait a little bit, whatever, five minutes between the set. Maybe they have to do small adjustment,” Monfils said.

Djokovic, who was critical of the Australian Open earlier this week, was also scathing post-match, saying tennis is now “more business than a sport”.

“There are certain days where you just have to, as a tournament supervisor, recognize that you might need to give players few extra hours until [the temperature] comes down,” he said.

“I think there is a limit, and that is a level of, I guess, tolerance between being fit and being in danger in terms of health. It was right at the limit [today].”

Despite the intense heat, there were no retirements throughout the day. But question are being raised over organizers’ reliance on official numbers to determine the health and safety of competing athletes.

After several players clearly struggled to perform in the oppressive conditions, many were calling for common sense to prevail.

And with temperatures expected to soar even higher on Friday, all eyes will be on Australian Open organizers and whether they enforce their own heat policy.