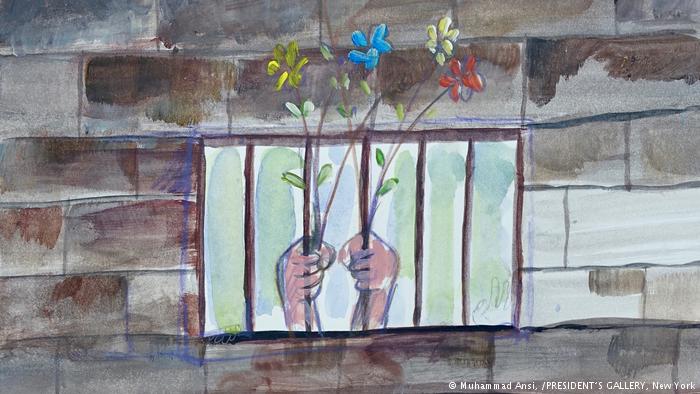 A prison cell at Guantanamo may not be the most inspiring place for an artist. But a few detainees held at the notorious prison have still found a way to explore their creativity. A show in New York presents their work.Djamel Ameziane spent 11 years at Guantanamo Bay detention camp from 2002 to 2013. He was repatriated to his native Algeria to continue his incarceration there. During his time at Guantanamo, however, Ameziane and a number of other detainees went from being mere prisoners to becoming artists.

His work is now being exhibited in New York alongside paintings from several other inmates held at the notorious US detention facility on the island of Cuba. The “President’s Gallery” at the John Jay College of Criminal Justice in New York organized the divisive exhibition “Ode to the Sea: Art from Guantanamo” to highlight some of the untold stories of those who have been held at Guantanamo since the attacks on September 11, 2001, and to provide a glimpse into a world that is otherwise hidden from the public eye.

The exhibition presents a total of 36 works from eight prisoners at Guantanamo, including drawing and watercolor paintings.

Djamel Ameziane recalls how he first got into painting after an occupational therapist organized the first art therapy course at Guantanamo in late 2008. He started with landscapes and seascapes, using his imagination to depict a world outside of the prison walls. Ameziane says that it became a way to escape the confines of his cell.

Ammar Al-Baluchi is another prisoner at Guantanamo Bay, accused of having been instrumental in organizing the 9/11 attacks. He is a blood relative of both Khalid Sheikh Mohammed, the mastermind behind the attacks, and of Ramzi Yousef, the organizer of the 1993 World Trade Center bombing.

His paintings, however, appear to reveal another side of his personality. Colorful dots are spiraling into an abyss, creating almost a sense of dizziness in the eye of the beholder. Aptly named “Vertigo,” the watercolor painting almost seems a bit childish and clumsy, yet it represents the inner world of a criminal the world knows little else about.

A different escape from prison

The idea of having art therapy at one of the most controversial top-security prisons in the world sounds almost absurd at first, but it actually benefited both the inmates as well as the US military personnel running the Guantanamo Bay detention camp.

When former US President Barack Obama decided to ease some of the conditions at Guantanamo in 2009 the detainees got to enjoy some new-found, limited freedoms such as watching television and reading newspapers. They were also given access to occupational and arts therapy, helping a number of inmates to cope with their situation.

Four of the inmates whose work is highlighted at the exhibition in New York have meanwhile been released from captivity.

A positive spin on Guantanamo

Much like Guantanamo itself, the exhibition has been seen as a highly controversial undertaking. US President Donald Trump would ideally like to see the show stopped, and his administration has made it difficult for curator Erin Thompson to go ahead with the project. Pentagon spokesman Ben Sakrisson told the dpa news agency that exporting art from Guantanamo would be banned in future. Those that are being shown in New York have meanwhile been classified as government property, and the exhibition had to be closed for a short period pending confirmation on its legal status. The dispute is likely to continue.

The Guantanamo Bay detention camp was established after the attack on 9/11 under then-President George W. Bush to house those linked to these terror attacks and other alleged Islamists while awaiting trial. At one point, there were up to 780 detainees held at the facility, where some human rights organizations say the “enhanced interrogation” techniques employed amounted to torture.

Most of those 780 prisoners were never charged or tried. More than 500 of them were released while others were transferred to prisons in their home countries. All this painted Guantanamo Bay in a negative light, even though it housed some of the organizers of the September 11 attacks.

Little was known about initiatives designed to help detainees cope with their everyday lives until the “Ode to the Sea: Art from Guantanamo” exhibition shed some light on art therapy and other such methods.

Despite having attracted a great deal of media coverage, not many visitors have made it to the exhibition so far. The entrance is somewhat difficult to find, hidden away on the fifth floor of the John Jay College of Criminal Justice.

To date, there have only been 500 visitors; however, more than 20,000 people have looked at the online version of the exhibition catalog, curator Erin Thompson explains. There, visitors can not only get a glimpse at the actual images shown at the exhibit but get to see a number of additional documents from the detainees, including letters, poems, and videos.

The exhibition also tries to humanize the inmates, who for years have been reduced to prisoner numbers. Their biographies and origins are detailed, portraying their identities as opposed to just the crimes they were alleged to have been involved in.

Moath Al-Alawi, an inmate accused of having worked as a bodyguard for Osama Bin Laden, says in the exhibition catalog that he hopes the art show will help people get a more comprehensive idea about the lives of the detainees at Guantanamo:

“We want to achieve that people out there stop thinking that we are all negative beings. We aren’t all extremists. We don’t hate beautiful things.”