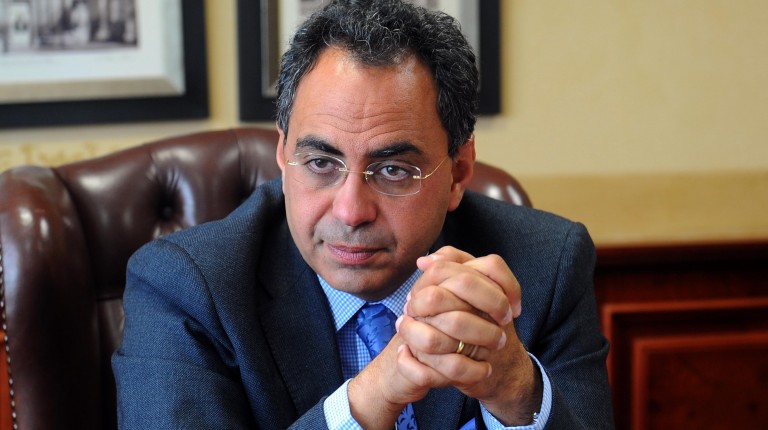 The aim of the meeting is to discuss the vision of UN envoy to Libya, Ghassan Salama, regarding recent updates in Libya,  and to review the results of the consultations conducted by him with the various Libyan parties, as well as the recent regional and international contacts.

On Tuesday, Shoukry met with his Libyan counterpart, Mohamed Taher Siala, on the sidelines of the ministerial meeting of the Arab League, to discuss bilateral relations and other issues of common interest.

During the meeting, the ministers reviewed during latest political and security updates of Libyan crisis. Shoukry and Siala also discussed preparations of the upcoming ministerial meeting that will be hosted in London in 14 September to discuss Libyan issue.

Libyan minister praised at the beginning of the meeting, the Egyptian diplomatic efforts of various levels to help the Libyans to achieve national consensus, he further expressed his aspiration for additional coordination with Egypt regarding finding possible solution for the situation in Libya and efforts to confront terrorism.

The two sides have further discussed outcomes of the Forth Meeting of the African Union High-Level Committee on Libya, that was recently held in Brazzaville the capital of Congo. The outcomes included forming a committee of parliament and state council members to amend Al-Sokhairat agreement that aimed at reaching consensus formulas to create political settlement to preserve the unity of Libyan territory and support its institutions.

Shoukry confirmed the necessity of preserving the tripartite cooperation of Libya, Algeria, and Egypt to resolve the Libyan crisis, through the continual coordination.

Following the meeting, the ministry of foreign affairs released a statement warning of the continual of illegal immigration to Libya due to the current conditions there, and also called on Egyptian citizens residing in Libya to avoid the areas of tension and clashes.

The ministry also called on the citizens to not follow brokers who assist in the illegal immigration process to Libya, as they are always leaving people in deserts, harming their lives.

Early in March, President Abdel Fattah Al-Sisi confirmed during his press conference with German chancellor Angela Merkel the Egyptian efforts to support Libya, as it wants to reach a political solution in Libya and preserve its territorial safety without division, noting that the Egyptian efforts did not fail, but rather require more work.

Egypt made progress regarding the Libyan situation as it attended meetings with a number of significant high-level Libyan figures, aiming to reach possible solutions for the Libyan conflict.

In February, Shoukry attended a tripartite meeting with Algeria and Tunisia to continue discussions over Libya’s situation and further steps to activate the Tunisian initiative to resolve the Libyan crisis through the cooperation and coordination of the three countries.

Egypt has actively sought a solution to the Libyan turmoil over the past few months, which has increased over the past few years following the downfall of Muammar Gaddafi, as militants have taken over several areas in Libya.

TNCRD to meet in Sudan on Thursday

Al-Sisi meets delegation of US National Council of Churches