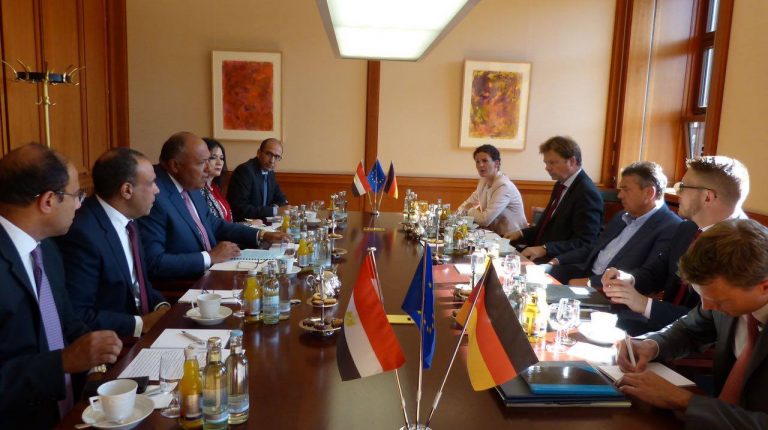 Egyptian Minister of Foreign Affairs Sameh Shoukry witnessed Sunday the signing of an agreement between Egypt and Germany to cooperate in facing illegal migration, in a meeting he held with his German counterpart Sigmar Gabriel in Berlin.

According to the Egyptian Foreign Affairs Ministry, the two sides agreed to seek solutions that explore the socioeconomic aspects of the issue beyond just security solutions, while maintaining the rights of migrants and refugees as per international laws.

As he updated Gabriel on the Libyan crisis and peace negotiations with Palestine and Israel, Shoukry took the opportunity to bring up the crisis with Qatar and assert that Egypt and the boycotting Gulf states maintain their demands that Qatar renounces its “support for terrorism and its interference in other countries’ affairs.”

Headed Sunday to Germany in a three-day visit to Europe, Shoukry will also visit Belarus and Romania.

In the Belarusian capital, Minsk, he will meet President Alexander Lukashenko. According to a statement on Saturday by the ministry, Shoukry will hand Lukashenko a letter from Egyptian President Abdel Fattah Al-Sisi, which asserts the importance of building on the results of the last visit of the Belarusian president to Egypt.

In January 2017, Lukashenko visited Egypt and met with Al-Sisi. The two presidents signed nine cooperation agreements in the fields of environment, water resources, agriculture, and sports.

They also included a cooperation agreement on military techniques and production, an agreement to transfer convicts, and a joint plan for economic, social, and cultural exchange between Minsk and South Sinai, according the presidency’ statement.

The Egyptian minister will also hold meetings with his Belarusian counterpart, Vladimir MacKay; Belarusian Minister of Trade Vladimir Koltovich; and members of the National Assembly of the Republic of Belarus.

On Tuesday, Shoukry will meet Romanian President Klaus Iohannis in Bucharest to hand him a letter from Al-Sisi, in which the latter expresses Egypt’s keenness on boosting bilateral and diplomatic relations between both countries.

Shoukry is expected to hold meetings with his Romanian counterpart, Teodor Melescanu, and with heads of the Romanian parliament. He will also sign three agreements in the fields of tourism, political dialogue, and free entry for diplomatic passports holders, according to the statement.

According to ministry spokesperson Ahmed Abou Zaid, Shoukry will be the guest of honour in the annual forum of the Romanian ambassadors abroad and will give a speech on Egypt’s vision towards several regional and international issues of common interest.

On Wednesday, Shoukry ended a European tour to Russia, Estonia, and Lithuania, in light of Egypt’s keenness to develop bilateral relations with the three countries.