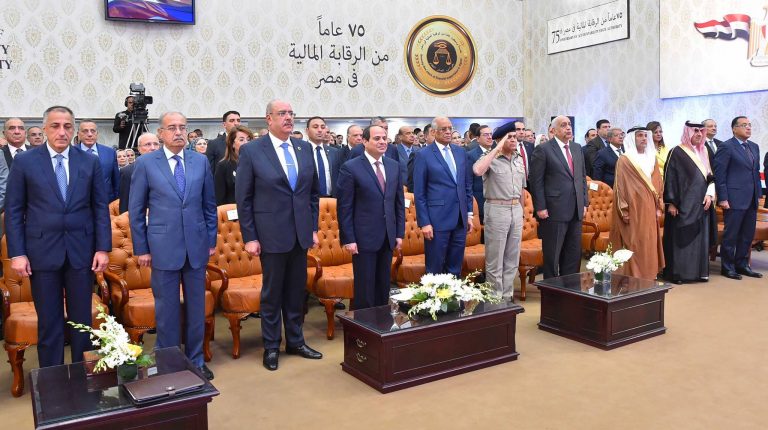 President Abdel Fattah Al-Sisi attended on Monday the celebration of the 75th anniversary of establishing the Central Auditing Organisation (CAO). Al-Sisi praised the organisation and its high impact on controlling and improving the performance of the governmental sector, according to a statement from the presidency.

The president also praised the role of the organisation in enhancing the performance of the executive agencies, and the rational management of the expenses and revenues. He also congratulated the organsation and the people of Egypt for this occasion, stressing the pivotal role of the authority since its establishment in controlling the money of the state and its affiliated authorities.

During the celebration, Al-Sisi watched a documentary about the authority and its historical role.

On its statement during the celebration, head of the Central Auditing Organisation Hisham Badawy reviewed the role of the authority in rationalising the financial policies of the state and confronting corruption, revealing irregularities, and following big projects, asserting that the state’s support for the authority contributed to activating the positive role of the authority and controlling practices.

Badawy also decorated the president during the celebration.

Harib Al Amimi, the chief of the Accountability Authority in the United Arab Emirates (UAE) and the head of the International Organisation of Supreme Audit Institutions (INTOSAI), praised the role of the audit institutions in preserving the assets of people, pointing out that the audit work has become more important in the national and international levels due to its role in improving governmental performance and the rational allocation of funds.

Al Amimi also praised the relationship between Egypt and the UAE, as well as the cooperation between the Egyptian Central Auditing Organisation and its Emirati counterpart, pointing out the important role of Egyptians in supporting the Emirati governmental sector in all developmental plans.

At the end of the celebration, Al-Sisi honoured a number of former workers in the authority. The celebration was attended by a number of ministers and officials, in addition to the head of the audit authorities in Saudi Arabia and the UAE.

The Central Auditing Organisation was established in 1942 by Royal Declaration No. 52 of King Farouk I. The authority was named the Accountability Office until changing the name to the current one in 1964. The authority is affiliated with the presidency and targets controlling the money of the state.