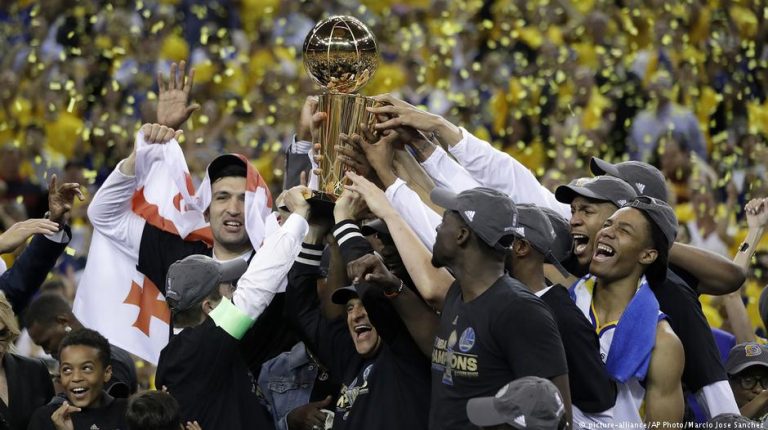 The Golden State Warriors have beaten the Cleveland Cavaliers 129-120 in Game 5 of the NBA finals to win their fifth championship in franchise history. The Warriors took the best-of-seven series four games to one.Monday night’s win, which gave Golden State their second NBA title in the past three seasons, capped a near-perfect run through this year’s playoffs and avenged last year’s loss to LeBron James and his Cleveland Cavaliers.

Kevin Durant, who joined the team from the Oklahoma City Thunder before the season, led the way for the Warrriors with 39 points on the night and was named the most valuable player of the NBA finals.

“I couldn’t sleep for two days, I was anxious, I was jittery,” Durant, 28, said in the post-game, on-court interview. “I just wanted to lay it all out there. I put in work, I just had to trust in it. We were really good tonight.”

Warriors point guard Steph Curry said the experience of losing in last year’s finals served them well in this year’s run to the title.

“We learned from everything we’ve been through,” Curry said. “To be back here and bring gold Larry (the O’Brien trophy) back home, I’m just excited to be a part of this group and accomplish something special. I’m ready to do it again.”

Golden State, who beat Cleveland in the 2015 finals only to lose to them last year after squandering a 3-1 series lead, set a record in this season’s playoffs by losing just one of their 16 games, their only loss coming in Game 4 of the finals.

Cavaliers forward LeBron James was the highest scorer on the night with 41 points and early in the second quarter they appeared to be in the driver’s seat, having built an eight-point lead. However, Golden State, playing in front of their home fans, bounced back to take an 11-point lead into the halftime break. Early in the second half, the Cavaliers managed to narrow the Warriors lead, but were never able to draw level.

For his part, James said he had no reason to hang his head.

“I left everything on the floor every game, all five games,” he said. “I have no reason to put my head down.”

For James, a three-time NBA champion, the defeat saw him earn the dubious distinction of being just the fourth player in NBA history to be on the losing team in a finals series five times.