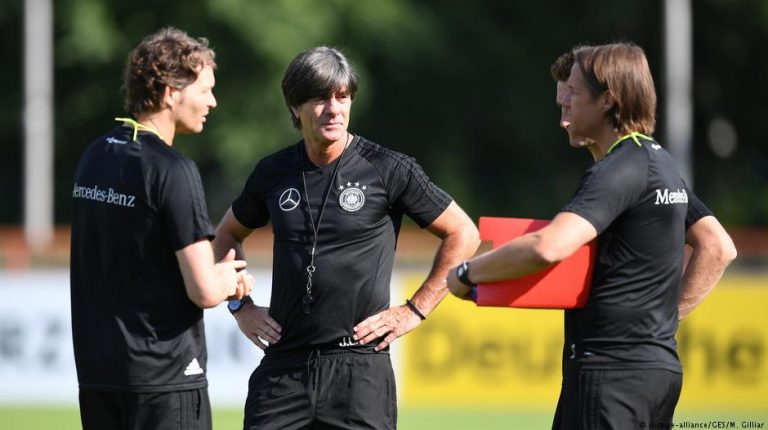 The German national team have trained in Frankfurt before flying out to Russia for the Confederations Cup. Joachim Löw has defended his squad selection with their first game on Monday against Australia.Germany coach Joachim Löw is looking forward to the challenge of the upcoming Confederations Cup and has again defended his decision not to take several top stars to Russia.

“I do not see that as a big risk at the Confederations Cup, quite the opposite,” Löw said ahead of the squad gathering in Frankfurt on Tuesday.

Goalkeeper captain Manuel Neuer is injured but other World Cup winners such as Toni Kroos, Mesut Özil and Thomas Müller have been given time to rest – but there has been criticism of this move, particularly from hosts Russia.

“I can, of course, understand that some have a certain disappointment,” Loew said. “But the fans want to see these top players at a good level for another couple of years. And they do not want to see them injured.”

The June 17-July 2 Confederations Cup across four Russian cities is seen by Loew as “a chance” and a “broadening of horizons” for his team.

“It will be an important experience for some players to play with the A-team against Australia, Cameroon or Chile,” he said. “That is something different to the Bundesliga or the Europa League. There are other menalities, different ideas of football from what we know here.”

With the 2018 World Cup in Russia just a year, Löw said the Confed Cup was “a tournament for testing – both for the hosts and for us.”