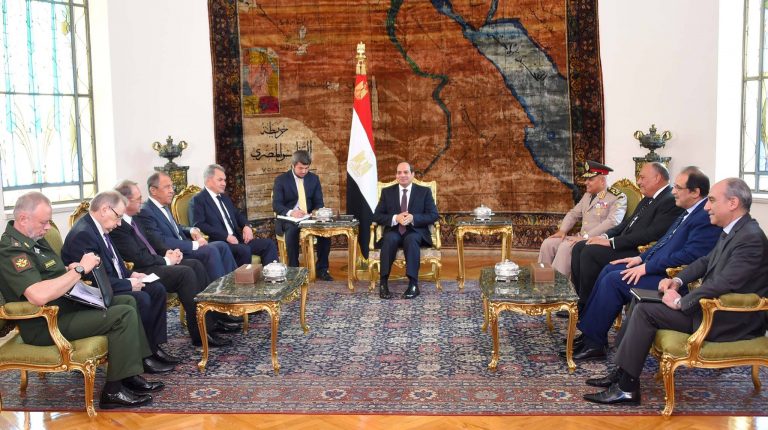 President Abdel Fattah Al-Sisi received on Monday Russian minister of foreign affairs Sergey Lavrov and minister of defence Sergei Shoygu in the presence of Egypt’s Minister of Defence Sedki Sobhi and Minister of Foreign Affairs Sameh Shoukry, according to an official presidency statement.

Al-Sisi expressed Egypt’s pride of the tight relationship between Russia and Egypt and its keenness on developing it in different fields in the near future. Also, he praised the strategic dialogue between the ministries of defence and foreign affairs of both countries, especially due to its role as an important channel for consultation and discussions about issues of common interest, the statement read.

Presidency spokesperson Alaa Youssef said that President Al-Sisi asserted that the challenges the Middle East faces need more cooperation between Moscow and Cairo to achieve stability in the region. Youssef also said that the Russian ministers delivered president Putin’s greetings to Al-Sisi and praised the level which the Russian-Egyptian relations have reached in the last years, while expressing the Russian desire to have strategic relationships with Egypt.

Shoygu and Lavrov expressed their desire for consultations and exchanging views with Egypt on several bilateral and international issues of common interest, according to Youssef.

The meeting touched on bilateral relations and President Al-Sisi asserted Egypt’s keenness on deepening the cooperation with Russia in economic, commercial, and industrial fields. Al-Sisi also welcomed the important Russian projects in Egypt such as the Dabaa nuclear power plant and the establishment of a Russian industrial zone in Egypt, according to the statement.

The president and the Russian ministers discussed the impact of terrorism and extremism and its spread. The two sides asserted the importance of the international cooperation to encounter terrorism. Also, the Russian side praised Egypt’s efforts.

Shoukry receives his Sudanese counterpart after weeks of tensions