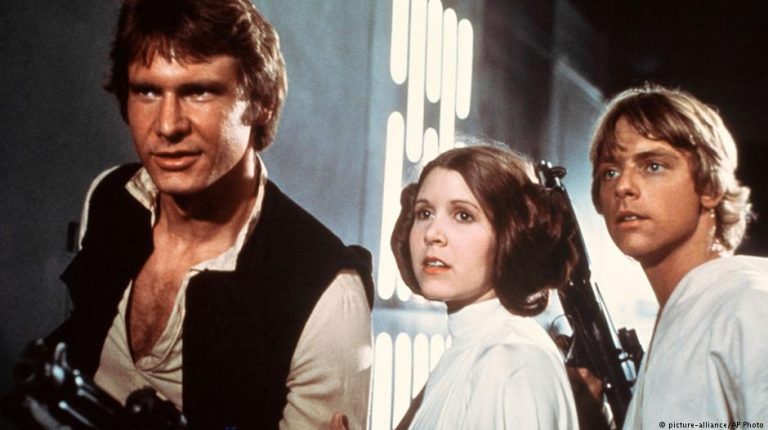 “A long time ago in a galaxy far, far away….” On May 25, 1977, these words flashed onto the movie screen for the first time. And that was more than just the beginning of a space saga.There is a war in outer space. The über-evil Emperor is spreading fear throughout the galaxy with a super weapon. But a Rebel Alliance has formed to fight back.

We can all sing along with John Williams’ film music and imitate Darth Vader’s raspy voice or Chewbacca’s wordless grunt – even those of us who may never have seen a single Star Wars film. When George Lucas began work on the Star Wars screenplays in 1973, he never could have dreamed of having such a huge impact on popular culture – although he certainly was out to revolutionize Hollywood.

Off to a rough start

But it was a long, hard path until the first film was finally finished. The production company was concerned about the millions of dollars it had put into the project. Most of the actors were young and relatively unknown. Bigger names like Alex Guinness and Peter Cushing just had small parts.

The filming conditions were – in part – catastrophic and involved burning heat in the deserts of Tunisia, sweating actors, and an increasingly irritated Lucas about to have a nervous breakdown. What’s more, the visual effects team was light years behind schedule – even though Lucas had founded a new company just to handle that task.

The planned release date for December 1976 was postponed until the following May. For the production company, 20th Century Fox, this was the worst possible time to release a film – and no one thought it would be a success.

The beginning of a revolution

But all those worries were quickly forgotten on the day after May 25, 1977. The world premiere was celebrated by viewers, critics and the entire film team alike. The $11 million in production costs suddenly seemed like peanuts; the box office hit brought in a whopping $503 million, making it the most financially successful film of all time.

The next Star Wars episodes followed in 1980 (“The Empire Strikes Back”) and in 1983 (“Return of the Jedi”). The three films told the story of Darth Vader, Luke Skywalker, Princess Leia and Han Solo. That was all, we thought at least.

But George Lucas simply couldn’t let go. In 1999, he launched a new Star Wars trilogy that told the story of what had happened prior to his first three films. There had been peace in the galaxy until the evil Supreme Chancellor Valorum took power and the young Jedi knight Anakin Skywalker became Darth Vader. Audiences were mesmerized by the installation of prequel movies.

Even that was not enough. In 2012, Disney bought the rights to the Star Wars saga for $4 billion and released the seventh film at the end of 2015. The story picks up where the original trilogy left off, proving to be a recipe of success: Old Star Wars fans joined back in and young new fans were equally won over.

All seven Star War films have raked in more than $6 billion, but that’s nothing compared to the merchandise revenue. More than $20 billion in Legos, t-shirts and other fan paraphernalia have been sold over the years – and there is no end in sight.

Whatever happens after that is written in the stars.

Stars belonging to Centaurus A exist farther out than previously thought

Disney films are finally back in Egyptian dialect!