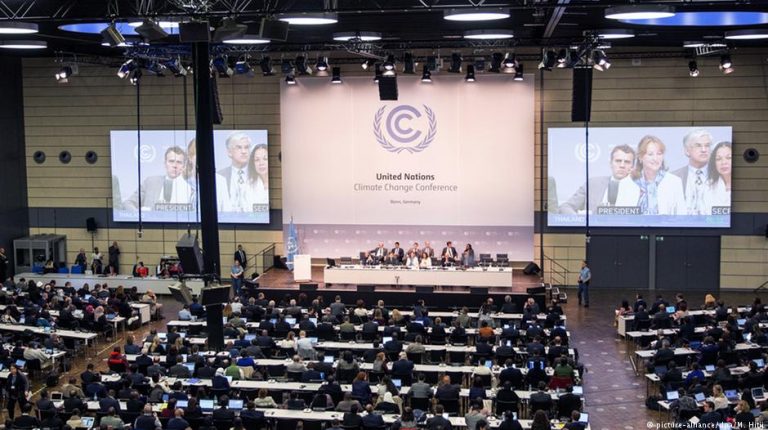 The influence of fossil fuel lobbyists on climate negotiations has come into the spotlight at the Bonn climate conference. But debate over their role has only just begun.The starting gun for next global climate conference COP23 in November went off this week in Bonn, Germany, as representatives from 196 countries gathered for preparatory meetings May 8 to 18.

Most participants share the common goal of achieving sustainable societies and increasing climate protection. But government leaders, environmental activists and policy-makers are not the only ones attending the talks.

Lobbyists from various sectors also use the chance to make their voices heard, and promote their interests – which are not always in line with climate protection.

A recently published report from Corporate Accountability International, a United States-based nongovernmental organization, has highlighted the strong power of trade and business organizations at climate-related events.

Many of these groups, particularly from the fossil fuel industry, represent interests that run counter to environmental protection. However, all are allowed to attend the international climate conferences, hosted by the United Nations Framework Convention on Climate Change (UNFCCC).

The National Mining Association in the US, for instance, supports increased coal consumption and contributes to climate change, the report reads. It also regularly sends representatives to climate conferences.

As does the United States Chamber of Commerce. The largest lobbying group in the country – and the largest chamber of commerce in the world – it advocates for nuclear power, offshore oil production and drilling in the Arctic National Wildlife Refuge, among other climate-counterintuitive actions.

Integrating such groups into climate protection negotiations has lead to disagreement with other participants.

As this became a bone of contention, the UNFCCC at the May 2017 climate conference in Bonn organized the first-ever official workshop on how to deal with non-party stakeholders.

Since public participation was one of the main drivers of the Paris climate agreement, limiting the inclusion of certain actors is not the clear solution.

During the discussion, Patricia Espinosa – head of UNFCCC – emphasized the importance of civil society for climate negotiations. She reminded listeners that every participant has their mission, and that no one will be left behind.

Jesse Bragg, a spokesperson for Corporate Accountability International, applauded the effort which, for the first time, allowed all parties and civil society to sit together to openly discuss the conflicts of interests within climate negotiations.

“For a long time, the negotiations ignored that there are large fossil fuel corporations being represented here by trade associations,” Bragg told DW.

Tamar Lawrence-Samuel, also of Corporate Accountability International, highlighted how conflicts of interests are not an exception, but rather the norm.

But thanks to this initiative, meaningful conversations among stakeholders have started taking place – and have opened the way to solutions, she added.

The World Health Organization (WHO) framework on tobacco control, implemented in 2003, has been presented as a model.

“It is a very good example for parties to take and implement,” Bragg said.

“It protects the policy-making space from the interests and interference of the tobacco industry,” he added.

Max Andersson, a representative of the Greens in the European Parliament, holds the same view.

The tobacco business and the fossil fuels industry have more money than any climate organization – and they even have an even larger influence in political spheres, he said.

He held these up as reasons for why it is important to monitor the behavior of such large stakeholders.

With or without you

But closing the climate meeting’s door to lobbyists is not the solution, participants in the discussion argued, since excluding them will not restrict their power.

Even if lobbyists don’t take part within the meetings, they will still influence them from the outside, participants concluded.

“The influence of the fossil fuel industry shapes countries’ positions before they even arrive here,” Bragg pointed out.

Moreover, lobbies are not limited to fossil fuel companies – and some of them contribute to climate protection more efficiently than governments do.

In a wrap-up looking at next steps, panelists spoke of erecting a “firewall” against lobby influence from the fossil fuel industry.

Participants agreed: This first session has marked a starting point for raising awareness around conflicts of interest, and set foundations for future discussion.

But it is only a first step – which will feed into future negotiations, Bragg concluded.

WHO, UNFCCC team up to protect health from climate change at COP23

Optimism at climate conference, despite US hesitation

Granting indigenous land rights could save the climate – or not

‘Trump effect is not terminal’ for climate talks