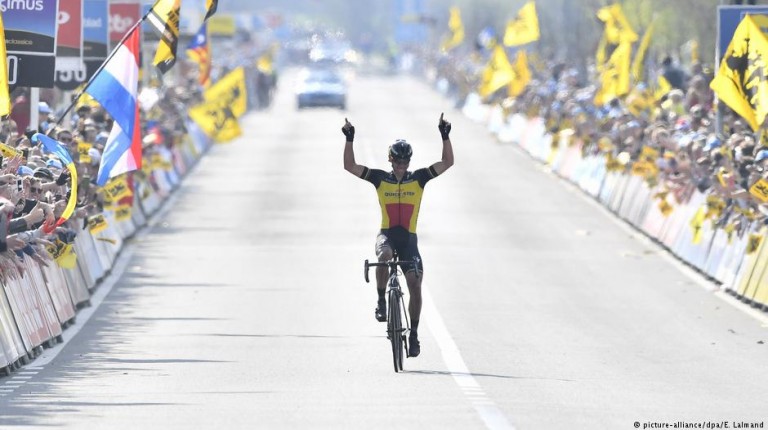 Philippe Gilbert’s bold solo breakaway in the last 50km was enough to beat the world and Olympic champions and secure the title. It’s the 34-year-old Belgian’s first Tour of Flanders win after missing out six times.Belgian veteran Philippe Gilbert used every ounce of experience to unleash a devastating attack to win the Tour of Flanders for the first time in his career.

On the Oude-Kwaremont climb, Gilbert and his Quick-Step teammates turned up the pace and stormed clear of world champion Peter Sagan and Olympic gold medalist Greg Van Avermaet, who finished second.

With no chasers in sight, Gilbert stopped before the finishing line and hoisted his bike aloft.

“Until two kilometres to go I wasn’t really sure I could resist the guys behind because they were coming a little back,” said the 34-year-old.

“I was really focusing on my effort until almost the last kilometre. Then in the long straight I could see the finish line at the end. I was looking back and I saw I still had a gap so I thought: ‘I will do something special’.

“I thought this will be a nice picture with the bike in the air and the jersey stretched – something special.”

Sunday’s race was Gilbert’s seventh participation in the Tour of Flanders and he secured his third ‘Monument’ classic after wins at the Tour of Lombardy in 2009 and 2010, and Liege-Bastogne-Liege in 2011.

His retiring Belgian teammate Tom Boonen suffered a technical fault which took him out of contention. The three-time winner of the Tour of Flanders and Gilbert, who wears a jersey in the colours of his home country’s flag, compete at the prestigious Paris-Roubaix one-day race next weekend.