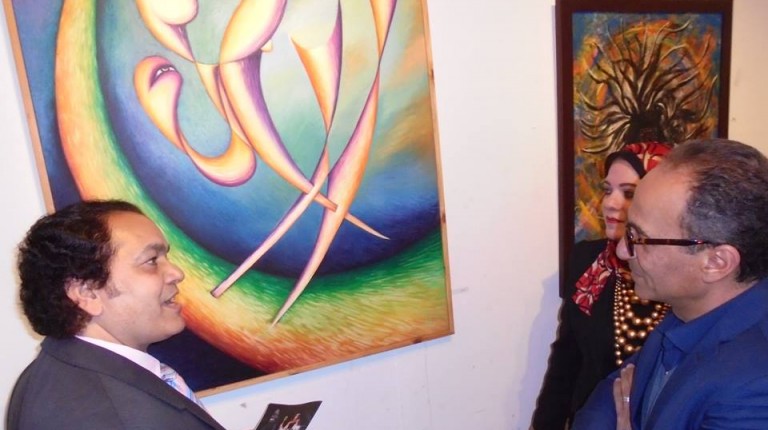 Aiming to celebrate the national women’s day, the “Women from Egypt” exhibition was held on the 16 March at Al-Hanager theatre under the supervision of Vinous Fouad, the head of the Literary and Competitions Affairs Central Administration and the undersecretary of the Ministry of Culture. The exhibition witnessed the participation of 60 artists, who received grants from the Ministry of Culture to fund their artistic projects. The displayed pieces varied from paintings and graphic art to sculptures and photographs.

“The exhibition aims mainly to celebrate the Egyptian woman and integrate creative artists into their society’s problems, struggles, and pains to urge them to become active citizens in their local communities. We also celebrate the year of women empowerment, announced earlier by President Abdel Fatah Al-Sisi,’’ Fouad said.

The artistic works portrayed women from Upper Egypt and rural areas, with great emphasis on the role women played in the Egyptian revolutions and their current circumstances in 2017. Some paintings also portrayed the dreams of ballet and tango dancers; others tackled the employment of women and how this affects the upbringing of children from various perspectives.

“Among the outstanding paintings that discussed women’s role in the revolution was a picture about Shimaa El Sabagh, who died after suffering from injuries sustained from shotgun wounds while she was demonstrating peacefully. The painting added some new philosophical perspectives to the issue and will be gifted to the Ministry of Culture,’’ she added.

Despite being stated in the Egyptian constitution, many people don’t know that the government must provide enough support to artists and authors.

“Since the 1980s until 2014, the government used to allocate only EGP 1.8 million for sponsoring the arts and culture fields in Egypt, but this has never been enough,’’ Fouad said.

Aiming to help improve the current circumstances of artists and writers, Fouad decided to increase the budget to EGP 5m in 2014 to start providing two kinds of sponsorships to the most creative talents.

“We provide two kinds of support: financial and logistical. The financial support includes paying a monthly amount to the artist so that he or she could cover their expenses, which would encourage them to focus more on their artistic career,’’ she noted.

To guarantee an equal distribution of the resources, the financial fund only lasts four years; after that, the artist can get the logistical support that may help them hold an exhibition, produce a movie or a play, or promote their book and organise book-signing events,’’ she noted.

However, there is a long process of many stages so that an artist could receive the fund. The artist must first submit a sample of their artistic work to a committee, which consists of three judges who evaluate the quality of their art and the funding category they must be enrolled in.

“Artists may receive 1,200, 1,800 or 2,400 pounds on a monthly basis. Currently, we apply a process called the ‘Secret Names Technique’ to prevent any nepotism, hence guaranteeing that all artists will get the money they really deserve. We want to change that negative stereotype about artists who get support from the ministry. Over years, people used to be ashamed of this, although it is their right to be funded by the government,’’ she added.

Although the ministry supports about 257 artists nowadays, there is a plan to increase the budget to help more artists.

“This year, I hope to increase the budget to EGP 6.2m to be able to provide the required support to 300 Egyptian artists and writers, which will reflect on the quality of the artistic scene in Egypt on the long term,’’ she concluded.

At Art Jameel graduates exhibition, the past meets the future

Women through the eyes of Walid Ebied