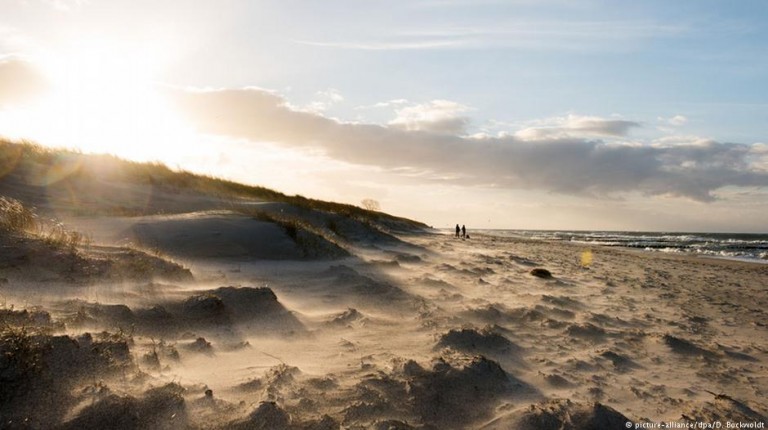 In the Baltic seaside resort of Ahrenshoop, a week of festivities starting on March 25 will kick off celebrations set to last until October to mark the 125th anniversary of the founding of its artists‘ colony.680 residents, two artists’ houses, six galleries: those numbers clearly show where the Baltic resort of Ahrenshoop on the Fischland-Darss-Zingst Peninsula puts its focus – on art. And it’s been doing so for 125 years. In 1892 Paul Müller-Kaempff (1861-1941) built a house in the still sleepy fishing village and laid the foundations for the artists’ colony whose anniversary will be celebrated from March 25 until October. Dozens of artists found the time, surroundings and suitable light for their work there. Members of the founding generation included Anna Gerresheim (1852-1921), Elisabeth von Eicken (1862-1940) and Carl Malchin (1838-1923) – names that resonate with art lovers.

Resort director Roland Völcker says an art trail will take visitors to the spots from which artists painted their pictures. Two eye-catching milestones call attention to the anniversary. For them, Moritz Götze, one of the best-known exponents of German pop art, made two wooden sculptures. A five-meter tall depiction of Müller-Kaempff stands on the Bakelberg, an 18-meter hill. Opposite, on the slightly lower Schifferberg, stands an interpretation of a “painting woman.” Völcker says both works are meant to be impermanent and will decay.

The anniversary is the occasion for a year of celebration with the theme of maintaining traditions while living in the spirit of the times. At its heart is an exhibition, “Light, Air, Freedom,” in the art museum, which opened in 2013. About 90 paintings by the leading exponents of the founding generation are being shown, “many for the first time,” as Marion Schael from the museum emphasizes.

“A harmonious trio makes Ahrenshoop interesting for any artist,” says the honorary mayor, Hans Götze, himself a painter and graphic artist. Part of it is formed by the village itself, which grew up over decades and still exists. “In addition, Ahrenshoop is blessed with intact natural surroundings.”

That includes the Western Pomerania Lagoon Area National Park, the Baltic Sea and the lagoon virtually at its doorstep. “We make efforts to preserve nature in this form,” said Götze. He is confident that art and the artistic climate are what make the triad complete. He says the outward signs of that are the many thatched houses and the artistic opportunities, and not just in the high season, adding that visitors come not only to admire the art, but also to take one of the art courses on offer.

But even without art, the village can’t complain of any lack of popularity: overnight stays numbered about 380,000 in 2016. Gerlinde Creutzburg says the fellowship holders who come here also form part of Ahrenshoop’s distinctive character. She’s the director of the Kunstlerhaus Lukas in the house that Müller-Kaempff built. “I’m responsible for the future in Ahrenshoop.” Every month about six young artists from all artistic fields – in addition to the visual arts, literature, composition and performance – come to the village, and 150,000 euros are invested, with the largest amount coming from the state.

Creutzburg adds that Ahrenshoop has no need to shy away from comparisons with the Worpswede artists’ colony near Bremen. “Worpswede is the western German Ahrenshoop; Ahrenshoop is the eastern German Worpswede.” The community on the Baltic Sea has always been a place of refuge for notable artists, even during the war and post-war years. “They went there to enjoy the light, air and freedom and to take inspiration from them,” as Marion Schael relates.

Ahrenshoop is not the only place that has inspired artists; so have the countryside around Worpswede, Rügen’s chalk cliffs, the romantic Rhine Valley, the area of Saxony known as Saxon Switzerland and the Alpine panorama in southern Germany.