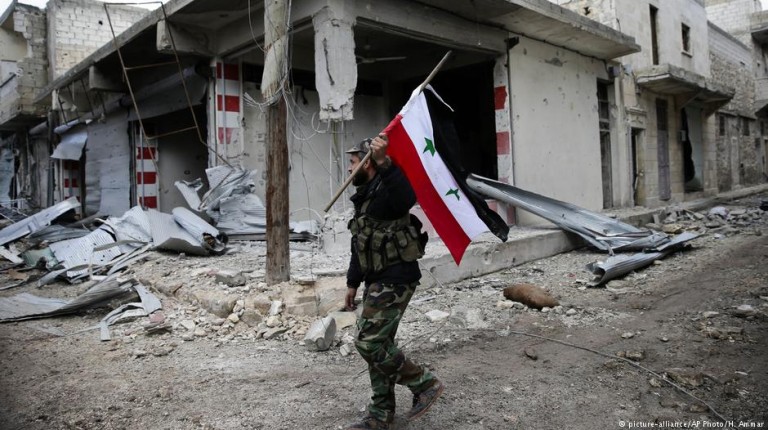 Marking fresh efforts to revive peace talks, the UN’s chief Syria mediator has called for more than “military victory.” Staffan de Mistura also said he’ll meet with US President-elect Donald Trump’s transition team.UN envoy for Syria Staffan de Mistura on Thursday said upcoming talks between Russia and the US in Geneva concerning the withdrawal of opposition fighters in Aleppo are an encouraging development towards a political solution to the conflict.

“Perhaps now is the time to actually look seriously at the possible renewal of looking at when how we can have political discussions, because there is an awareness that military victory is not peace, because peace has to be won separately,” de Misura said.

“Otherwise, we will leave with the impression, which no one wants to have, that there is only a military victory or military solution,” the UN official added.

De Mistura has led peace brokering efforts since 2014, when former UN chief Kofi Annan and veteran diplomat Lakhdar Brahimi quit due to a deadlock on how to achieve a political solution in Syria.

More than 300,000 people have been killed and half the population displaced since 2011, when government forces launched a brutal crackdown on peaceful protesters calling for Syrian President Bashar al-Assad to step down.

The UN General Assembly is expected to vote down a ceasefire resolution on Friday due to Russian and Chinese vetoes on the Security Council. However, the Assembly resolution is non-binding.

The vote will “demonstrate that there is a moral majority here,” adding that countries are “distressed that through a series of vetoes, the Security Council has failed to provide the unity necessary to change the situation in Syria,” said British ambassador to the UN Matthew Rycroft.

However, Russia dismissed the resolution, saying it would not change the facts on that ground, which show a likely victory for Syrian government forces in retaking Aleppo.

“To expect that it’s going to produce some kind of dramatic U-turn in the situation in Syria is unrealistic,” said Russian ambassador to the UN Vitaly Churkin.

Meanwhile, De Mistura announced on Thursday that he would meet “people around the team” of US President-elect Donald Trump, who is expected to be sworn in as the US president in January.

De Mistura said he had “some ideas” about how Washington “would be able to help fight terrorism in a very effective way.”

DOU by Misura: Shoes for the free spirited