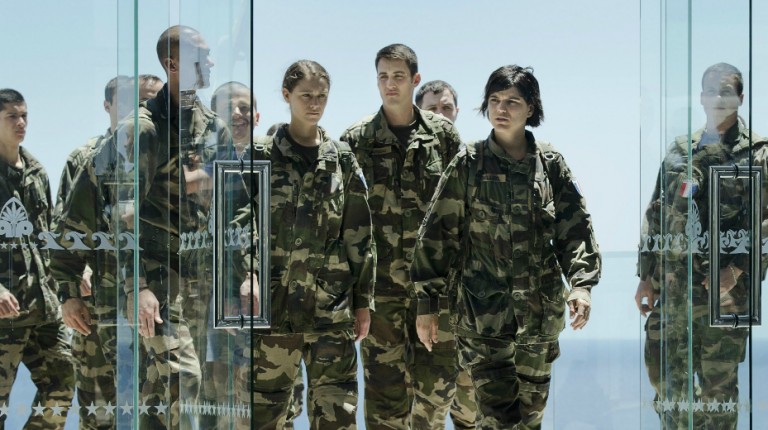 What would a resting warrior look like? How would he feel and would he think about? If your answer is “I don’t now and I didn’t think about it before,” then you need to see the film Stopover. If you can imagine how a warrior thinks and feels, you also need to see the film because the warriors in this case are two French women soldiers who just finished their tour in Afghanistan and are headed back home. On the way, they stop at a resort to rest and submit themselves to psychological evaluation.

From the first moment of the film, directors and script writers Delphine and Muriel Coulin use colours and cinema language to draw a bold line separating two different groups: civilians and military. The opening scene is an aeroplane full of soldiers covering their eyes with masks. When they reach the hotel, they contact the civilians who are dressed more colourfully and are dancing. While the civilians actively enjoy themselves with music, the soldiers coolly smoke hashish, distancing themselves from the others.

The directors still use colours to define two groups in the military horde, both of them tough. All of them have psychological problems, as one of the soldiers admits when she and two friends talk about the pet snake they have.

The two directors chose this crawling animal specifically to symbolise the damage that all the soldiers witnessed and how they pretend to be in good shape although they’re not. This is especially applicable to the women who choose to carry two kinds of burden: the war and the male soldiers who underestimate them.

This Little Father Obsession: searching for an identity

The Train of Salt and Sugar: an odyssey of bitter and sweet

Kills on Wheels: looking for a hero

Together For Ever: growing emotions