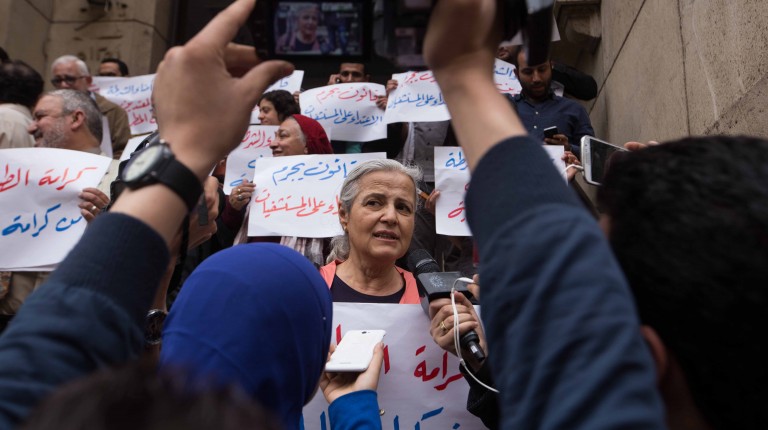 The Cairo branch of the Doctors Syndicate addressed the head office on Saturday to express solidarity with the syndicate’s undersecretary Mona Mina after media statements were distorted to create backlash against her.

“We strongly condemn the manner in which Mina’s statements during a TV interview were manipulated and taken out of context,” the syndicate stated.

“Instead of grasping the importance of the shortage in medical supplies she was discussing, or considering it an alert to officials and the public, there was an unprecedented number of insults and complaints to the general prosecutor, accusing her of spreading false news and disturbing public order,” it added.

Describing the incident as “an intended distortion of Mina and the entire syndicate”, the statement concluded that it “obviously aimed to distract people [from the real issues] and cover up numerous crises in the healthcare system.”

While discussing the shortage in medical supplies, Mina actually said she received a complaint from a doctor that the hospital he works for ordered him to use the same syringes more than once on several patients.

After the distortion of her statement, Mina was accused of falsely claiming that these were general orders now applied in hospitals.

The next day, Health Ministry spokesperson Khaled Megahed said that the ministry filed an official complaint to the prosecutor general, because such statements are unacceptable.

“We asked her to give us the name of the hospital where it happened or the doctor who claimed so. She refused to reveal a name out of fear of causing harm to the doctor, choosing instead to harm all Egyptians,” Megahed said in a phone call to Sada El-Balad TV channel during a programme presented by member of parliament Mustafa Bakry, who demanded that Mina be penalised.

This comes as the Doctors Syndicate’s board of directors issued a statement after sitting with Mina on 19 October. “Despite already knowing, the syndicate’s board rechecked the letter sent to Mina by the doctor and assures that its content was exactly as she reported it during the TV interview.”

The undersecretary is popular for defending doctors’ rights and people’s rights to a proper healthcare system, often criticising ineffective government policies in the field. Mina’s recent legal battle was related to obtaining a decent infections allowance for doctors who are at risk of contracting dangerous infections in their line of work.

Doctor who took selfie in surgery suspended, referred to investigations