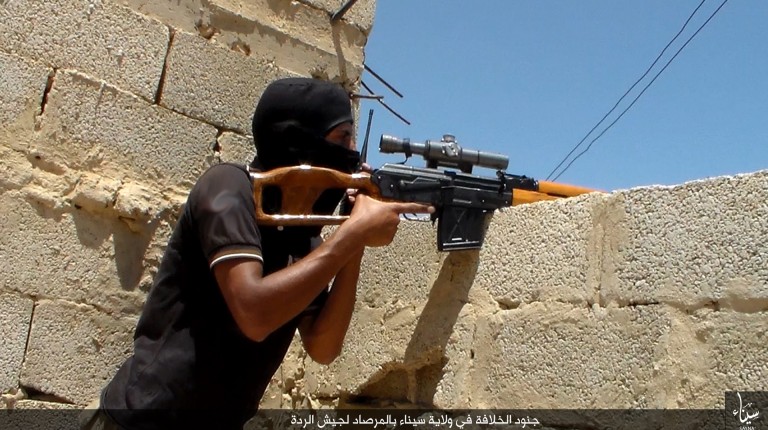 Islamic State (IS)-affiliated militant group “Sinai Province” published on Friday evening photos that allegedly depict the beheading of two elderly men, which they claim are priests, in an unknown desert area in North Sinai. The photos were released on the group’s official Twitter account.

The photos depict a group of “Sinai Province” militants standing in a circle while a verdict is being read out to an elderly man who is blindfolded and kneeling. These photos were entitled “The work of the Islamic police”.

The photos depicting how the man is decapitated are called “The execution of a legitimate verdict against two priests”. A second elderly man is forced to take the position of the man who was decapitated in the photos that followed, which bear the same name. The second man is also decapitated.

Several residents in the North Sinai city of Al-Arish, who spoke to Daily News Egypt on condition of anonymity, denied that the second man in the video is a priest, despite “Sinai Province” claiming otherwise.

“The second man who appeared in the photos is Sheikh Soliman Abu Harraz. He is an elderly man who is nearly 100 years old. This sheikh is considered one of the most prominent Islamic figures in North Sinai, and he was recently kidnapped from his residence in Al-Arish. He is not a priest,” one of residents of Al-Arish asserted on condition of anonymity.

Another resident said that the first man who appears in the “Sinai Province” photos is a Muslim sheikh whose name is Abu Qatifan. He was also recently kidnapped by anonymous militants.

“Sinai Province” did not publish any statement regarding why the two men were decapitated. Moreover, no reports have recently surfaced which claim that two priests were kidnapped.

The Interior Ministry was not available to comment on the incident or to verify its authenticity. The Orthodox Coptic Church was also not available for comment.

“Sinai Province” is targeting civilians who are allegedly known to be supporters of the ongoing operations against the militant group by the armed forces. The IS-affiliated group is apparently forcing North Sinai citizens to declare their affiliation to the terrorist organisation.

A number of North Sinai residents previously told Daily News Egypt that civilians desperately need security protection as they are threatened by militants on a daily basis.

“Sinai Province” kidnaps those it suspects of being army operators through investigations conducted by the group. Once kidnapped, militants kill the civilians following harsh interrogations, either by shooting or slaughtering them. The bodies are often left in public squares. In the rare case that a person is proved to not be an “operator”, they may be released, according to previous testimonies from residents.

Earlier on June, “Sinai Province” claimed responsibility for assassinating a priest named Rafael Moussa from Mary Guirguis Church in Al-Arish and justified the killing by saying that he was an “infidel”, according to a statement it released following the assassination.

The North Sinai priest was shot dead by anonymous gunmen, the Ministry of Interior said in an official statement released following the incident.

A spokesperson for the Coptic Orthodox Church said that Moussa is originally from Ismailia and the father to two children. He was appointed to the Mary Guirguis Church in 2012 along with another priest named Mina Aboud, who in July 2013 was also shot dead.

Since 2013, state security forces represented in both the army and police have been engaged in violent clashes with “Sinai Province”, known previously as Ansar Beit Al-Maqdis. In 2014, the group declared its affiliation to IS and has launched deadly attacks on army and police checkpoints.

Over the course of the last two years, the Egyptian Armed Forces launched counterattacks against militant stationing points across the Sinai Peninsula where the group is based, particularly in the cities of Sheikh Zuweid, Rafah, and Al-Arish.

‘Sinai Province’ admits its former leader was killed by army