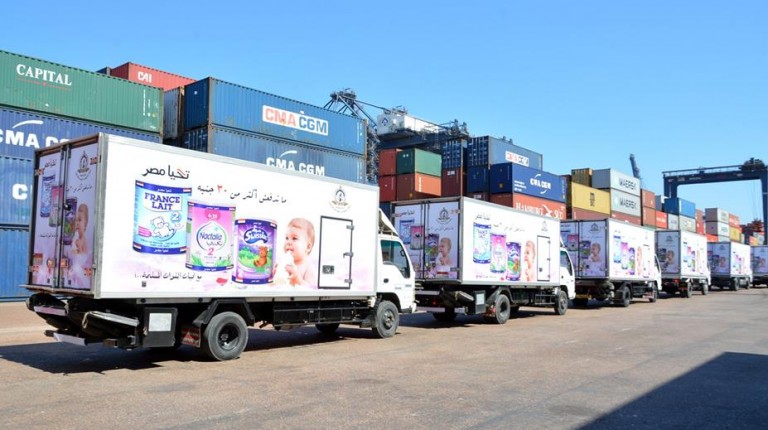 After President Abdel Fattah Al-Sisi instructed the armed forces to provide affordable subsidised baby formula to families in response to the recent shortage, army spokesperson Mohamed Samir said on Monday that the first shipment of baby formula had arrived.

The army’s intervention came after dozens of families protested earlier in September against the shortage of subsidised baby formula in front of the Egyptian Pharmaceutical Trading Company.

Families decided to assemble at the company’s headquarters and block the main road, after going back and forth between the company and other retail outlets in search of the formula.

Following the protest, the army spokesperson announced that the armed forces will execute an initiative to provide affordable subsidised baby formula as “an attempt to counter the greed of traders and companies,” according to a previous statement from the spokesperson.

“The first shipment of subsidised baby formula arrived at El-Dekheila port in Alexandria. The Army National Service Projects Apparatus and the Health Ministry signed a contract with a French company to import baby formula in order to provide affordable formula in the local markets at a price of EGP 30,” the army spokesperson said on Monday.

Samir asserted that following the arrival of the first shipment, several committees from the armed forces, and the Imports and Exports Censorship Public Authority were formed to check the shipment and verify that it meets the required standards.

The army’s decision was met with criticism and interpreted as a move by the army to monopolise the industry.

Canadian teenager Stroll to drive for Williams in 2017

In Video: Families protesting against the shortage of subsidised infant milk

Subsidised infants milk to be sold only in ministry outlets: Health Minister