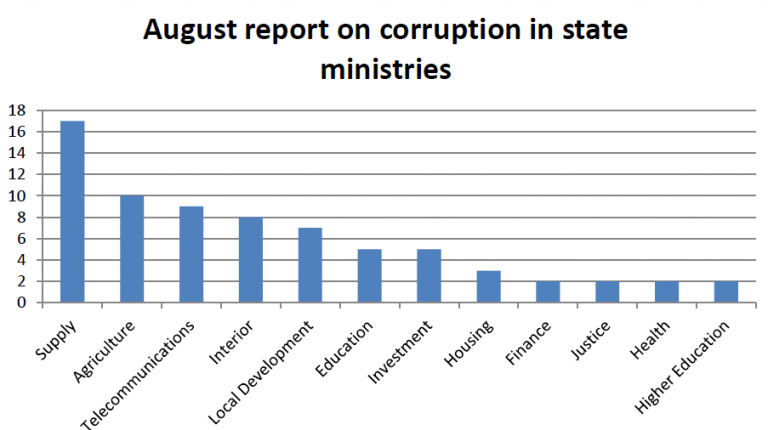 Anti-corruption NGO Partners for Transparency (PFT) said Saturday that there have been at least 83 incidents of corruption reported in August, according to its monthly report.

According to geographical distribution, most cases occurred in Cairo with 24 reported incidents, followed by Giza with 13 cases, then Sharqeya and Qena governorates with six cases each, Alexandria and Beheira with four cases each, and less than four cases for the rest of the governorates.

The Ministry of Supply continued to top PFT’s list with the highest number of cases of corruption, estimated by the report at 17. A recently exposed case of wide corruption related to wheat supplies heavily contributed to the ministry’s ranking on top of the list.

The wheat fraud case caused the cabinet to accept the resignation of former Supply Minister Khaled Hanafy, as prosecution authorities launched investigations and ordered the detention of several officials and silo owners.

“The largest case of corruption was the wheat fraud case, as the parliamentary Fact-Finding Committee estimated that at least two tonnes of scam wheat supplies cost EGP 5.6bn. As such, Hanafy’s resignation was accepted as he faced several accusations filed to the general prosecutor of wasting public funds,” PFT stated.

The report added that investigations include officials from the ministries of supply and agriculture, as well as from the Organisation for Export and Import Control and silo companies.

While members of parliament planned to question the minister, their work was halted due to his resignation. The resignation is the second in the government working under President Abdel Fattah Al-Sisi, after the former agriculture minister was sentenced to prison after being charged with accepting bribes.

Meanwhile, the report stated that the second most corrupt ministry was the Agriculture Ministry with 10 cases, followed by the ministries of telecommunications, interior, and local development, each with more than five cases in August. Other ministries which scored between two to five cases included education, investment, housing, finance, justice, health, and higher education.

Bribes of more than EGP 8m in Agriculture Ministry case